Over 100 Shops Destroyed by Fire in Akyem Oda 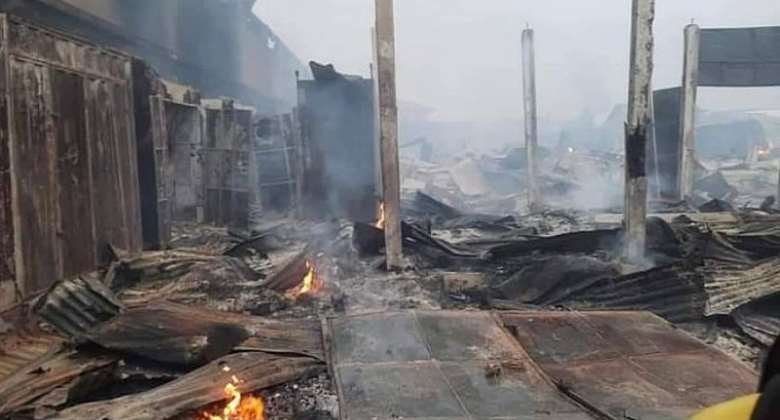 Over (100) shops have been destroyed by devastated fire in Akyem Oda in the Birim Central Municipality of the Eastern Region.

The fire that started Monday evening around 7: 30 PM has destroyed properties worth millions of Ghana cedis.

The personnel from Ghana Fire Service, Police Service, Military, and Immigration Service thronged to the scene trying to bring the fire under control but all efforts to salvage the outbreak proofed futile. Traders who had information that the market was on fire upon their arrival at the scene prevented their goodies for being gutted by the fire outbreak. In fact, about ninety-eight percent of traders in the said market have lost their properties.

In an interview with the ISD, some affected persons pleaded with the government to take urgent steps to rebuild the market, since the place is considered as a source of livelihood to them. Other affected persons also appealed to government to support them with loans to start-up a new life. Victims who became unconsciousness were rushed to the Oda government hospital for treatment.

Mrs. Victoria Adu, the Municipal Chief Executive for Birim Central and Mr. Alexander Akwasi Acquah, the Member of Parliament for Akyem Oda Constituency have also inspected the scene and consoled the affected persons.