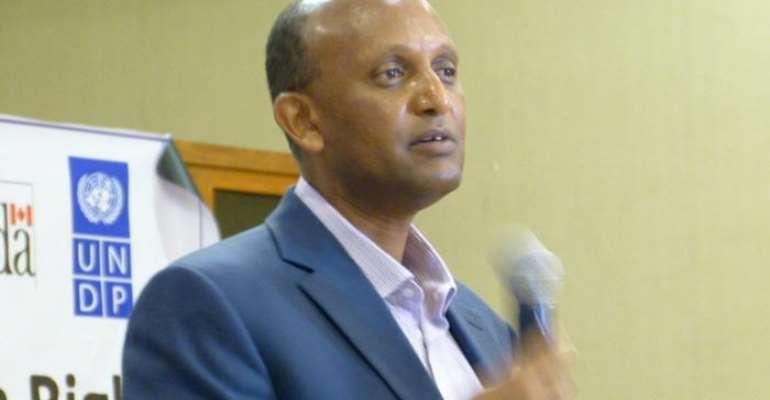 Daniel Bekele is humbled to receive the German Africa Prize

Ethiopian lawyer Daniel Bekele is the winner of the 2021 German Africa Prize. The human rights activist and chief commissioner of the Ethiopian Human Rights Commission (EHRC) is being honored for his unceasing commitment to monitoring and speaking out against injustice. DW will act as media partner at the award ceremony in Berlin in November.

The German Africa Prize is the highest award of its kind in Germany. It honors outstanding personalities from the African continent who are committed to peace, reconciliation and social progress.

"I am delighted that the independent jury has selected an outstanding human rights defender," said Uschi Eid, president of the German Africa Foundation, which presents the prize. She said that Bekele "deserves this prize for his lifelong advocacy of human rights. I sincerely hope that the award will encourage [him] and his colleagues at the Ethiopian Human Rights Commission to be fearless and impartial advocates for human rights in Ethiopia."

Bekele told DW he was "truly excited and humbled to be the first Ethiopian to receive this prestigious German award (…) I know it will go a long way to encourage and inspire my colleagues at the EHRC, as well as human rights defenders in my country Ethiopia and Africa, who work for the promotion and protection of human rights in increasingly challenging environments."

Daniel Bekele began his commitment to human rights early in his career. He started representing non-government organizations as a 23-year-old lawyer, quickly becoming a much sought-after expert on democracy and human rights. In 2004, Daniel became the Head of Policy Research and Advocacy for Ethiopia at the international charity ActionAid. At the same time, he was involved in the Global Call to Action Against Poverty, a network of thousands of

organizations promoting an end to poverty. As a civil society representative, Daniel assumed a leading role in monitoring Ethiopia's 2005 parliamentary elections. A critic of the election process, Bekele was attacked and injured by armed men in October 2005. He was subsequently arrested, imprisoned and convicted on charges of trying to "overthrow the government and the constitution." He remained in jail from November 2005 until March 2008.

"The human rights defender believes that economic and social recovery fails to lead to sustainable development without the enforcement of human and political rights," Eid from the German Africa Foundation said. "As such, [Daniel Bekele] doesn't shy away from criticizing donor countries in the North for their cooperation with authoritarian regimes."

In the wake of Ethiopia's democratic opening under Prime Minister Abiy Ahmed, who came to power in 2018, the country's parliament elected Bekele to lead the Ethiopian Human Rights Commission in 2019. Bekele has transformed the commission and has successfully advocated for its greater independence, with parliament passing an amendment in 2020 strengthening the commission's operational and financial autonomy.

The German Africa Foundation acknowledges, however, that Ethiopia's political crisis and the civil war in the country's northern Tigray province have cast a shadow over Becele's work at the Ethiopian Human Rights Commission. "It is not surprising that [the EHRC] has been subject to criticism in this context," the foundation said, adding that the EHRC had the difficult task of assessing human rights violations in an impartial manner in a politically charged atmosphere. The EHRC is currently conducting an investigation, together with the UN High Commissioner for Human Rights, into human rights violations committed by all sides in the Tigray conflict.

The German Africa Prize will be formally presented at a ceremony in November in Berlin. Since the inception of the German Africa Prize in 1993, it has been awarded to many notable Africans, including Kenyan IT pioneer Juliana Rotich , Ugandan human rights lawyer Nicholas Opiyo, South Africa's former anti-corruption campaigner and ombudswoman Thulisile Madonsela and Somali peace activist Ilwad Elman.