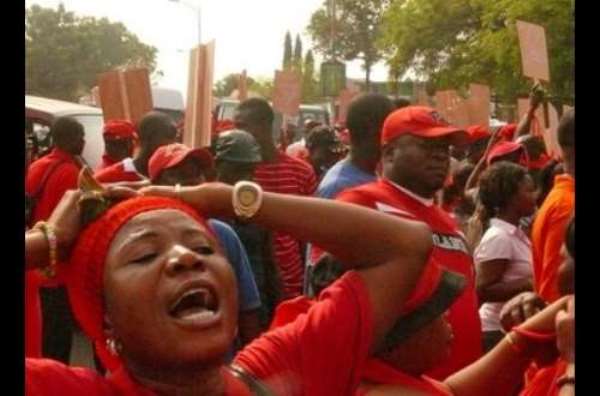 Several traders demonstrated at the Race Course market in Kumasi on Wednesday morning over what they say is disrespect and disregard of their concerns as citizens.

The traders whose anger was directed at the city’s authorities for what they said is lack of proper planning, expressed great disappointment in the President’s appointees in the Ashanti region.

One of the names they could not stop mentioning was the acting Mayor of Kumasi, Osei Assibey Antwi whom they said has failed Asanteman.

“Osei Asibbey has failed Kumasi and Asanteman. He is a disappointment to Akufo Addo, go and tell him,” the incensed women chorused in their local dialect, Twi.

The traders numbering over a thousand and clad in red arms and headbands to signify their 'bitterness' told newsmen that they are disgusted by the demolition of Kejetia without a proper relocation plan for them.

“We have now understood that city authorities do not think about we the traders, we are not against the development of Phase II of the Kejetia market but the right things must be done.

“Osei Assibey Antwi, mayor, has failed Asanteman. We the displaced traders were supposed to have been given a better interim space to trade while we await the second phase of the market but now we have been ignored so we want to tell President Akufo Addo understand that his appointees in the region have failed him”.

The traders who used to ply their trade at the Central Market were informed about the upcoming demolishing of the place to pave way for phase II of the development of the market.

However they vowed never to leave until bulldozers were used to evict them. Their reason was that they had not seen any proper relocation plan from the city authorities for which reason they refused to vacate the place.

Meanwhile, the Queen mother of the Race Course market, Nana Kyeiwaa has refuted allegations that she allocated the area, popularly known as Otumfuor’s land to the traders from Central Market.

She tells ModernGhana News that, “that place is a no go area because Otumfuor hasn’t asked anyone to trade there. They only lied that the Mayor and myself asked them to go there.”

Sod was cut for the Race Course market project in 2017 when President Nana Akufo-Addo joined the Asantehene Otumfuor Osei Tutu on the said land.

The €248 million project which is being financed by the Bank of Germany was supposed to be completed in 36 months but is now over 60 months and still, no sign of nearing completion.