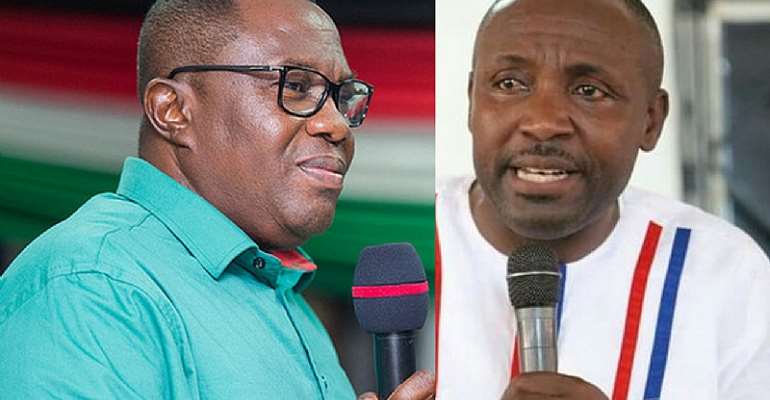 The National Chairman of the National Democratic Congress (NDC), Samuel Ofosu Ampofo has taken New Patriotic Party (NPP) General Secretary John Boadu to the cleaners after describing him as a big failure.

The comment from the NDC chairman comes on the back of a series of press conferences organised by the NPP where John Boadu had been throwing shades at ex-president John Dramani Mahama.

“Former President Mahama and Seth Terkper are on public record as being the worse duo to have ever been in charge of the Ghanaian economy at the same time,” John Boadu at one of the press conferences said jabbed the ex-President.

In reaction, Samuel Ofosu Ampofo said John Boadu is incompetent and it is as a result that his party lost so many Parliamentary seats in the 2020 general elections.

“What I want to tell the NPP General Secretary John Boadu who’s suddenly had a penchant for wearing suits and addressing press conferences and insulting ex-President Mahama is that he was elected General Secretary when the NPP had 169 seats in Parliament.

“He has failed woefully to protect the 169 seats and it has today dropped to 137 seats. If we are talking about competency and who is able to manage, John Boadu should not come and compare himself to Mr. Mahama,” Ofosu Ampofo said while addressing a gathering in Kumasi during Mahama’s Thank You tour of the region.

Samuel Ofosu Ampofo further noted that John Boadu would have been stopped from addressing the press over his incompetence if he was a member of the NPDC party.

“We went to the polls together and we are all witnesses to the logistics that the NPP deployed. We know the huge sums of monies the NPP spent during the elections and we also know all the things they shared to win votes.

“If you are a General Secretary and you are given all these things and you lose most of the seats you had and the NPP is using force to declare themselves the Majority in Parliament. How dare John Boadu to insult Mahama. I think that he has performed so abysmally that if it were to be the NDC, he would not have been given the chance or platform to be addressing press conference in the name of the party,” the NDC Chairman intimated.

Ablakwa demands answers on George Weah’s alleged use of Ghan...
25 minutes ago