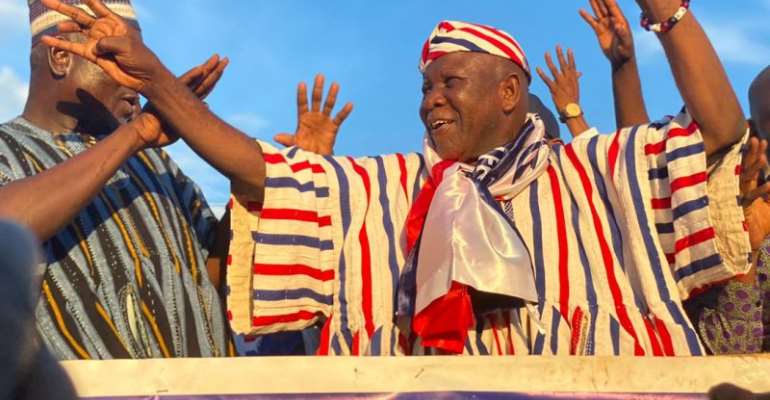 The Member of Parliament for Daboya-Mankarigu constituency who also doubles as the Deputy Minister for Health, Alhaji Asei Mahama Seini, has assured that the Daboya-Busunu road which suffered devastation as a result of flooding caused by torrential rain will be fixed today and opened to commuters and motorists.

He said this after visiting the affected portion to have first-hand information about the havoc on Tuesday, September 14th, 2021.

Speaking shortly after assessing the situation, the MP revealed that upon broader consultation with the Engineer of the construction firm tasked to construct the 24km road, a temporary measure was sought to alleviate the stress his constituents endure.

According to him, the road is expected to be reconnected to the Savannah Regional capital and other surrounding communities before the close of day, today.

"I came here today to observe the situation and to also sympathize with my people. Because when you are signalled to an unfortunate scene as a leader, you don't come to lament but proffer ideas to eradicate the plight of your people", the MP emphasized.

He also urged the people of Daboya and its adjoined communities to remain calm as he takes steps to bring the contractor, Logistics Support Services back to the site to restore the situation.

The contractor, Mr Peter Mahama, is alleged to have abandoned the road even when he was paid almost all his certificates.

News went viral over the weekend about floodwaters cutting off the Daboya-Busunu road after a weeklong of endless downpour on Saturday, 11th September 2021.

A KIA truck that attempted to crossover got stuck in the middle but the driver and his mate escaped unhurt.