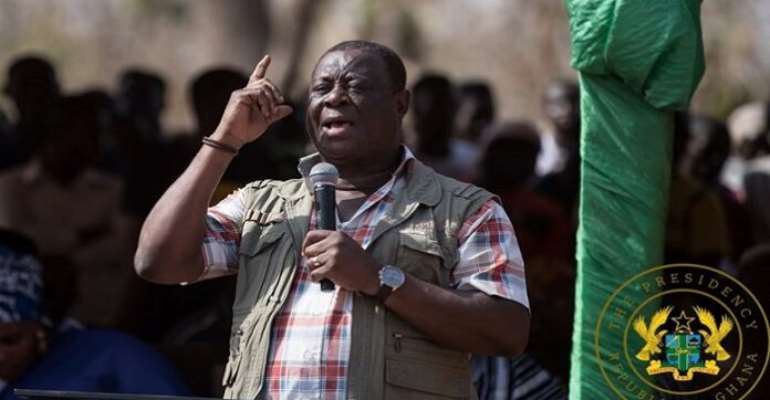 Minister of Roads and Highways, Kwasi Amoako-Attah, has ordered the closure of the tollbooth at Buipe on Wednesday, September 15.

The closure is to make way for contractors to work on the damaged parts of the Kintampo Buipe-Tamale road.

Two weeks ago, commuters on the Kintampo-Buipe-Tamale Highway were left stranded after an articulator truck and a bus traveling from opposite sides blocked a portion of the road near the Buipe toll booth, leaving no space for other vehicles to move freely.

The vehicles locked up while trying to navigate potholes that have developed on that part of the road. The incident resulted in heavy vehicular traffic of about two kilometers on both sides of the road.

Following the incident, the government has given QCMI Construction Limited, four weeks to fix the damaged parts of the road.

But, the Minister of Roads and Highways while inspecting ongoing works directed the tollbooth on the road to be closed by Wednesday morning.

He said this is to allow the contractor enough space to work and to also protect collectors at the tollbooth.

“I am directing that they should stop collecting tolls within these four weeks because the contractors are working close to the toll booth area. It is not even safe for the collectors, and we must not create anything that will hinder the work and progress of the contractors. So, with immediate effect, I am directing the Chief Director to issue out a directive that both ends of the toll booths should be closed from Wednesday morning.”

Mr. Amoako-Attah also announced that contractors have been deployed to roads in the Savannah region that have been washed off by this year’s torrential rains.

Several roads in the Savanna Region have been washed off by torrential rains, with the Busunu-Daboya road being the worse hit.

Mr. Amoako-Attah said contractors deployed to the Busunu-Daboya road have started work and are expected to finish work on the road within weeks.