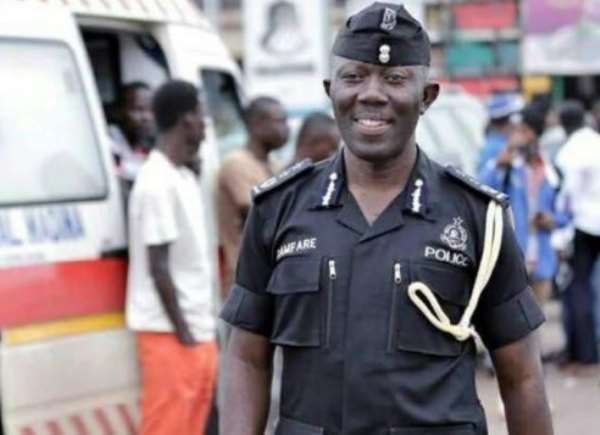 Since Dr Dompare was appointed the Inspector General of Police, the police dynamism so far exhibited in fighting the near chronic and scary armed robberies and unnecessary murders in the country is unrivalled and never witnessed in the nation for the past many years. The incidents of armed robberies, ritual murders carried out by both pastors and fetish priests or ritualists have taken the country by storm, sending cold chill down the spine of many a Ghanaian but with the government and the security forces incapable of dealing effectively with the situation to restore sanity and security to the nation.

Just as I was about to publish my views on a WhatsApp video forwarded to my page by one of my contacts regarding a guy gone on Captain Smart’s programme and self-confessing about how he had killed many people in Ghana for rituals, I decided to check if the video has been published on YouTube. While checking, I came across one of these mushroomed-posted social media videos indicating how the police had already nabbed the guy. Immediately, I said hallelujah, for the police are now seriously doing their job to stop these callous murders of innocent persons by pastors and ritualists in the country.

In order not to beat about the bush and or accuse the police of discrimination, I shall suggest to the IGP Dr Dompare to effect the immediate arrest of all or most of the pastors and others that had gone on air to boast about killing people or having knowledge of people murdered for rituals.

I had previously published two or more articles requesting the police to invite Reverend Kwaku Obofuor for interrogation following his self-confession to knowing a business tycoon in Ghana who kills people very often and drinks blood. However, all my such published requests fell on deaf ears, thus, went dead.

From the eleventh (11th) minute into the underlying video upwards, Rev. Obofour could be seen making that allegation. What stops the police from inviting him for interrogation into his assertion? Are the police scared of his popularity, riches or his large followers? Is he untouchable or it is as usual to arrest the poor but not the rich and powerful in the country hence letting him off the hook?

🔥Kennedy Agyapong: evidence submitted about Rev Obofour, now you have it so hit him hαrd as promised

Now that we have an IGP who is up to the task to free Ghana from the merciless murders committed for all stupid reasons by stupid power-seeking, money-seeking or fame-seeking pastors, traditional chiefs, politicians and ritualists, I can only advise the IGP to contact most of the media houses and or social media platforms to get more video-recorded information on such criminals to invite them for investigations.

Sometime ago, we had two guys called Demon Breaker and Manasseh, acclaimed repented pastors, claiming on Kennedy Agyapong’s (Hon) Net2TV how they had participated in, or had knowledge of, ritual killings of some people by some pastors.

Could the IGP contact journalist Kweku Annan of Net2TV for the recordings on the self-confession made by these two guys since he hosted them on his programme? Those pastors who committed the alleged murders may still be doing same hence must be found and arrested.

Again, either on same Net2TV or another station, another pastor made the chilling revelation of how he himself killed his own poor mother at a fetish priest’s shrine with the intent of getting more people to attend his church. That pastor must be found and arrested regardless of when, how and why the crime was committed.

Murder crimes can always be investigated until the suspects or the murderers have been apprehended, arraigned and convicted regardless of when the crimes took place.

More grease to the elbows of IGP Dr Dompare who has motivated his police force to get them to do the right thing.

Whoever comes across this publication should please forward it to their friends, family members, politicians and the IGP Dr Dompare.