Has The Kente Become A World-Wide Icon Of Style? 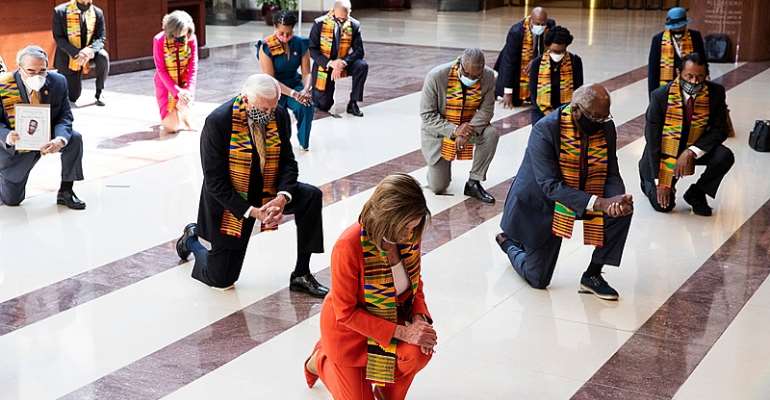 What do I know about couture? Ladies' dress style, in particular?

Not very much. Which is why it is noticeable that I have observed the prevalence of kente on our TV screens. It's becoming an icon in the African and African-American fashion worlds.

Now, I was sitting my somewhere flipping through DSTV channels to find something to watch when all of a sudden, some great, amazing colours popped up on the screen..

They looked like the colours from a kente cloth! However, they were so luxuriantly brilliant that I realised I had never seen such colours worn by any person before. Encased in a motif of yellow, the other colours were in an admixture of tasteful kente weaves that dared one to take one's eyes away. After a few moments, the colours dissolved and words appeared, to announce that AKWAABA TV station had arrived on DSTV!

Whoever designed that logo ought to be paid a huge bonus by the proprietors of the new TV station, for the logo was so aesthetic that it served as a statement in itself.

Now, I haven't really followed up to monitor the programming that AKWAABA is dishing out. But I did catch a glimpse of some films it was offering. However, there are so many films on DSTV channels that none registered on my consciousness. My sub-conscious, though,, told me that it could well be another case of glittering presentation without any in-depth programming content.

I'd forgotten all about AKWAABA when, on flipping through DSTV'Sprogramming again one day I came across AriseTV's “Morning Show” programme. I must declare an interest here: AriseTV and I go back a long time. I was sitting at my “somewhere” in London when out of the blue, I got a call from an old Nigerian friend, Prince Nduka Obaigbena, asking me to come and see him at New Zealand House, Trafalgarr Square. I'd worked in that building before ((as an editor on South Magazine). So the invitation seemed propitious.

I was right: Nduka offered me a contract to appear or AriseTV five days a week, and I had a terrific time for quite a few months, trying to woo viewers to the station, as a discussant on a programme called AfricaWrap.. Nduka later moved the operation to Nigeria and I lost touch with him.

Anyway, Arise is on DSTVnow, and is doing pretty well. So well that when President Buhari came under intense criticism some months ago for being too “cut off” from the Nigerian populace, he gave Arise TV an exclusive interview that turned out to be something of a publicity coup.

Now, President Buhari's wife has also put in her oar to make the Nigerian presidency more approachable – she has launched a footballcompetition and I saw a panel of ladies with her discussing the venture on AriseTV . That's nothing to write home about, is it? No! What struck me was that one of the ladies with the First Lady was dressed in a fetching outfit with unmistakable kentemotifs! Now, Nigerians do have an enormous collection of traditional colours in which to adorn themselves and so I was pleasantly surprised that a lady who was obviously highly-placed, should turn out in unmistakably kentecolours.

That reminded me that apart from Mrs Nancy Pelosi, I had seen kentemotifs here and there on the screen. I'd also seen it on the attire of many of the young musicians who are all over DSTV, singing the same sort of songs – albeit, in different languages – and using their hands as dancing instruments; plus expensive, beautiful motor-cars, as a major prop. More grease to their elbow! If the young have taken it up, then I am sure kentehas already cast the first die in the Pan-African couture stakes.

By the way, DSTV comes off badly by screening an ad for its new app that features a black person in cartoon terms reminiscent of of the Tarzan-in-Africa era. This guy has the eyes of a gorgon and is made to open his mouth wide in an expression that should be monstrously frightening to a juvenile.

Should DSTV be projecting such hateful, cardboard images of black persons? Shouldn't it exercise more caution on race issues, given the Network's South African origins? What I can DSTV is it that had I seen anything like that before I took part in judging the Multi-Choice/CNN “African Journalist Of The Year” competition of 2005, I would have hesitated in honouring the invitation. Repeated images are so important in the modern world, in case the current operators of DSTV don't know that. (For an article on me and Multi-Choice, see: https://newafricanmagazine.com/2874/

On the subject of images of Africans on TV, I think our producers and directors should note that some of their productions rely too much on a “gamut of emotions stretching from “A” to “B” (as one very witty critic once described the performance of an actress in a Hollywood film.)

Usually, my sub-conscious is right, and I then ask myself, have these guys heard of a “complex soap opera plot”? The answer is this: “To them, 'plot' may mean the same thing as repetitious adulterous relationships in Dallas! Or intra-family financial chicanery in Dynasty”!

Having talked about TY so much, and most of the time in negative terms, I would now like to my criticism “constructive (!) by offering an idea that could make a positive contribution to life in Ghana.

Could some enterprising producer please find sponsorship to do a programme on The Birds of Ghana? I am sure they could find an ornithologist or two to record the loves and times of a few of our beautiful birds before galamsey kills them off .

Right now, there is a bird which intrigue me a lot. It usually cries out around midnight, or even later. I've also heard it once or twice in the early evening. I've listened to the cries of falcons, ospreys, kestrels, sparrow hawks and goshawkson Youtube but I can't identify clearly, which of their cries come closest to this bird.. Also, could it be what the Akans call “abonsam-noma”? Just imagine using TV to track it down!

The Kwame Nkrumah University of Science and Technology, in co-operation with a German group, is studying Nightingales in West Africa. How great! You see, most of our birds are losing their habitation in Ghana, as a result of the activities of galamseyers. So I do wish someone would study all of them minutely before they are made extinct, through the activities of the galamseyer.

What a calamity it would be if our offspring never heard the enchanting trilling of, the okotorporieh, or aserewa sikansuo!