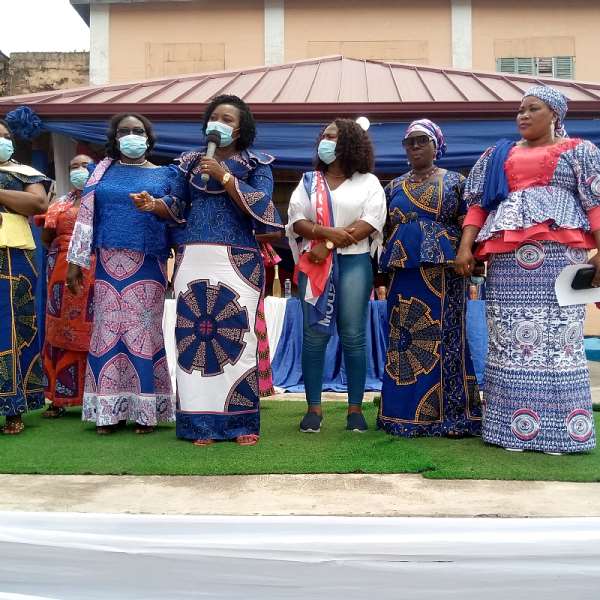 The Central Regional Minister, Hon. Mrs Justina Marigold Assan has said women in the ruling New Patriotic Party (NPP) were ready to join forces in the crusade to 'break the 8.'

She has therefore assured the top hierarchy of the party of their total commitment to win power come 2024.

She admonished the women especially the leadership against disunity, backbiting and bickering but to strive to work in unison bearing in mind they were all fighting for a common goal.

"It is has been said that women are their own enemies, let not this be said about NPP women in Agona West Constituency, for we should remain second to none.

"We must bury our differences and desist from washing our dirty clothes in the general public. We must also work with one accord towards victory 2024," she stated.

The Central Regional Minister further charged them to be committed and dedicated to discharge their assigned duties in line with the party's constitution.

"We should not rest on our oars but with hard work and togetherness towards the fight ahead of us. You don't have to pave way for our political opponents to take advantage to break up our fronts.

"Let us prove to the hierarchy of the NPP and the whole world that indeed Agona West is among the Strongholds of the party with overwhelmed results in the 2024 polls," she noted.

The Regional Minister also commended the Central Regional Executives of the NPP for their unflinching support towards the party activities and its growth.

She lauded them for the role they have been playing towards the implementation of government's programmes and policies aimed at improving the lives of the people.

Addressing the women, the Central Regional Women's Organizer of the NPP, Madam Charlotte Adwoa Antwi assures of her outfit readiness to support their programmes and activities to achieve the needed results for the NPP.

Madam Charlotte Adwoa acknowledged positive roles women in the party have been playing noting that, it explains why President Nana Addo Dankwa Akufo-Addo led NPP government has been appointing a sizable number of women to steer affairs of various government's Ministries and Agencies.

She encouraged the women to discharge their assigned duties fairly without fear of intimidation. "The top hierarchy of the NPP is behind you."

A leading member of the NPP in the Agona West Constituency, Mr. George Safo urged members of the NPP as well as party sympathizers to turn up in their numbers to register for the membership cards so that they could be eligible to contest for any position in the party.

"I will like to thank National Executives of NPP for this laudable membership drive. It is going to give us a clear picture of our membership in the Agona West Constituency.

"Apart from that we would be able to contact them periodically to strengthen our support base and to work together as a family. It will also eliminate intruders from our mist," he stressed.

According to Mr. George Safo, the membership registration will also rekindle the spirit of the party members at the grassroots.

Later in an interview with newsmen, the President of the Agona West Constituency branch of the NPP Women's Wing, Madam Monica Johnson Siaw disclosed that the group will propagate the brilliant performance of President Nana Addo Dankwa Akufo Addo led NPP government.

"We are going to break the Eight by showcasing achievements of the NPP Government to the electorates at their doorsteps. It is an opened secret that NPP has performed creditably than any government since Independence thus the need to communicate it well enough to the people.

"We are going to supplement efforts of our National, Regional and Constituency Communication Team to reach individuals to Appreciate this unprecedented record through public sensitization with the women folks at the markets, shops, restaurants, stores and lorry stations even hawkers on the streets for better appreciation for Government's achievements over the past four years," she told this reporter.

NPP representatives from Germany, United States of America, Australia and the United Kingdom lauded the Women's Wing while affirming their support towards victory 2024.

Hottest Photo Reports
Catch up with all the political quotes from our politicians.
Advertise here
More NPP News
ModernGhana Links
NPP urge party members to be ready to accept Akufo-Addo’s new MMDCE appointments
Breaking 'the eight' is a must – Yaw Preko charges NPP footsoldiers
Be responsible and apologise for your 'do or die' comment – NPP Germany to Mahama
Mahama must apologize to women and children for 'do and die' comment — NPP-USA Women's Wing
NPP Europe Council of Elders mourn with Bawumia over lost of mother
Subin: Confusion in NPP over membership registration
It's shocking, astonishing that none of us from Yalei-Kusawgu was appointed in Akufo-Addo's gov't — NPP Foot soldiers
I will be the first female President of Ghana — NPP Women's Organiser declares
Yapei Kusawgu: Are we not Ghanaians? – NPP group cry to Akufo-Addo over neglect
TOP STORIES