Paris honours Johnny Hallyday with statue and esplanade renamed after him 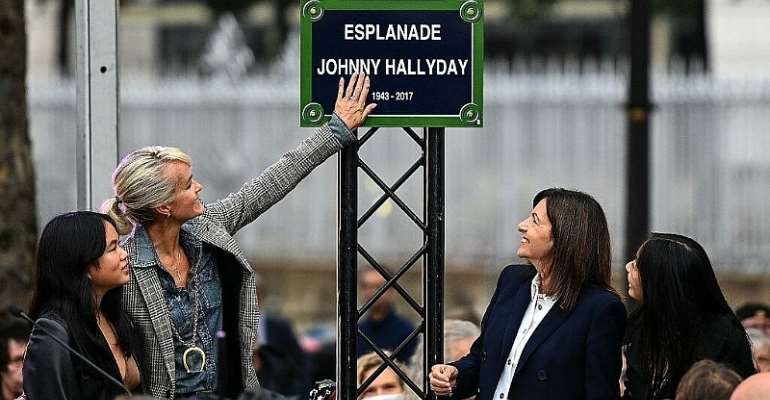 Four years after his death, adoring fans paid tribute to late French rocker Johnny Hallyday as a statue and an esplanade were inaugurated in Paris in honour of a star was often known as the "French Elvis".

On Tuesday morning, Paris mayor Anne Hidalgo, Laeticia Hallyday and her two daughters were on hand as the area in front of the Accor Arena in Paris -- a site where the rocker played 101 shows -- was renamed 'Esplanade Hallyday'.

"Johnny would have been proud to see his name anchored forever in the soil of Paris," she said.

Laeticia turned down the idea of a hologram Johnny at the concert, however, telling Le Parisien daily newspaper: "I'm not ready for that."

The star, who died in December 2017, will also be feted with a tribute concert "Que je t'aime" to be broadcast on France 2 TV and his very own "Johnny's Bar" at one of the city's biggest arenas.

But like much of Hallyday's life, the homage has not been without controversy.

The family feud that erupted over the partition of his vast estate means two of his four children -- actress Laura Smet and singer David Hallyday -- are not expected to attend.

Also the local Green party mayor initially objected to the statue, featuring his beloved Harley Davidson perched on the end of a guitar, feeling it was not in keeping with the city's environmentalist turn.

"Johnny Hallyday is a great artist, and I was looking forward to the idea of a work representing this great singer," Emmanuelle Pierre-Marie explained last June. "Now I'm dubious. At a time when we want to create a sustainable, peaceful city, the project mainly features a Harley-Davidson, which symbolises something completely different.

The work of 72-year-old visual artist Bertrand Lavier entitled Quelque chose de..., 6 meters high represents Johnny in a figurative way with a blue granito on the ground like on the walk of fame of Hollywood, a mast representing a guitar handle and a real Harley Davidson on top of it.

A place of remembrance for fans

"Johnny hated statues of himself, but his motorbike and guitar, represented in the statue, are inseparable from the singer, according to his wife. The aim of this event for Laeticia Hallyday is to offer fans a place to gather in Paris, as his body is buried on the island of Saint-Barthélemy," reports France TV.

Despite abandoning France to live out his days in the United States, Hallyday remains a phenomenon in his native land -- and streaming platforms are giving him a successful afterlife.

"In the collective subconscious, he is the greatest French singer," said Nicolas du Roy, a director for Spotify France.

"Young people are discovering him just as their parents are joining these platforms."