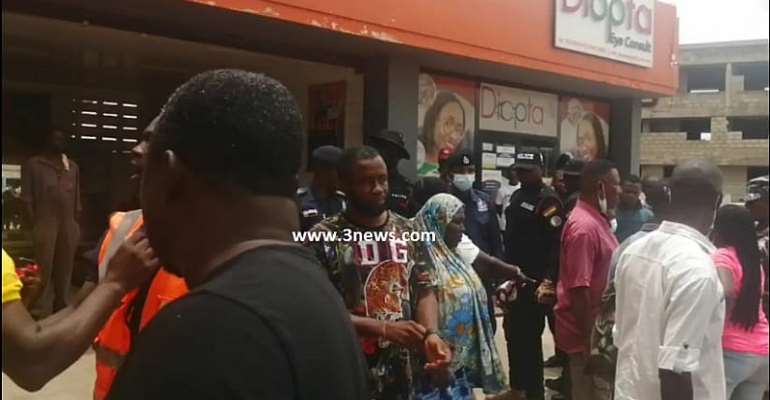 There is tension within the ruling New Patriotic Party (NPP) executives at Subin Constituency in the Ashanti Region over party membership registration.

General Secretary for NPP John Boadu, in a press conference last week, directed polling station executives to take custody of all registers to afford party members to review their details and new members to get registered.

But at Subin Constituency, the story is different, forcing polling station executives to march to the party office in demand for the register.

But for the timely intervention of personnel from the Manhyia Divisional Police Command who whisked him away, a different story might have been told.

Some of the aggrieved polling station executives who shared their sentiments with 3 news .com explained that “John Boadu has spoken and the directive is simple: all the registers must be kept at the polling stations but our constituency executives are keeping the documents to themselves so today we are here to protest for the membership register”.

Another angry polling station executive who identified himself as Koblah explained that “the Constituency Secretary told us earlier that the register is in but now he is telling a different story. Instead of him giving us the document, he’s dragging his feet so we decided to protest until the needful is done”.

Hottest Photo Reports
Catch up with all the political quotes from our politicians.
Advertise here
More NPP News
ModernGhana Links
NPP urge party members to be ready to accept Akufo-Addo’s new MMDCE appointments
Breaking 'the eight' is a must – Yaw Preko charges NPP footsoldiers
Be responsible and apologise for your 'do or die' comment – NPP Germany to Mahama
Mahama must apologize to women and children for 'do and die' comment — NPP-USA Women's Wing
NPP Europe Council of Elders mourn with Bawumia over lost of mother
NPP women battle ready for 'break the 8' agenda — Central Regional Minister
It's shocking, astonishing that none of us from Yalei-Kusawgu was appointed in Akufo-Addo's gov't — NPP Foot soldiers
I will be the first female President of Ghana — NPP Women's Organiser declares
Yapei Kusawgu: Are we not Ghanaians? – NPP group cry to Akufo-Addo over neglect
TOP STORIES