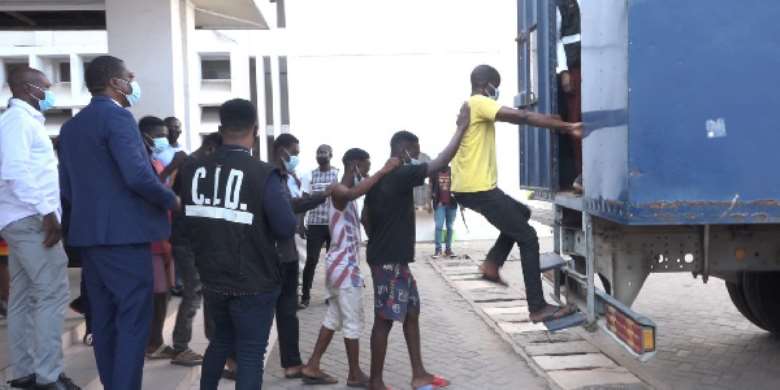 The vacation High Court in Accra presided over by Justice Comfort Tasiame has refused bail application filed by Francis Gbadago, a father of 19 children and five others who are part of a set of eight standing trial in the Western Togoland Restoration Front case.

The applicants the court said per documents from the prosecution, admitted playing an active role in participating in a prohibited organization.

The court also stated that the accused persons had earlier been granted bail when first arrested but went back again and were arrested.

But the court granted bail to one Excel Liberty Aheto Kuegbesika in the sum of 200, 000 with two sureties.

The accused persons are part of over 40 persons put in separate groups facing charges including being members of a prohibited organization.

They were remanded into prisons custody after pleading not guilty to 12 charges.

Moving the application for bail, counsel for Gbadago, the fourth accused person, argued that, the accused is married to two wives with 19 children and will not interfere with investigation.

Arguments were also advanced by lawyer George Asameni in respect of the other accused persons for them to be admitted to bail pending trial.

Documents regarding, the abode, residential addresses, and persons ready to stand sureties for them were also made known to the court.

Prosecution led by Frederick Adu Gyamfi opposed to the application for bail on grounds that, the accused persons if granted bail may not appear to stand trial.

These grounds, the prosecution said are supported by the fact that there is cogent evidence, the nature of the accusations brought against the accused, and the severity of punishment likely to be imposed upon conviction.

In respect of A1, he said, the evidence against him is such that, he has admitted in his cautioned statement to the police that he is a member of the prohibited organization in question.

He argued that there are also pictures that showed that A1 was captured in the demonstration at Juapong on September 25, 2020.

In respect of A2, Godwin Awudza, he argued that the evidence against him is such that, membership forms of the prohibited organization Western Togoland were found in his room.

Meanwhile, Gabriel Godfred Govina, the third accused person had earlier been admitted to bail in the sum of GHc200,000 with two sureties to be justified on health grounds.

The sureties the court said must deposit their valid national Identification Card to the registrar of the court.

E-levy consultations: Ofori-Atta is a soft-spoken liar – Ban...
54 minutes ago