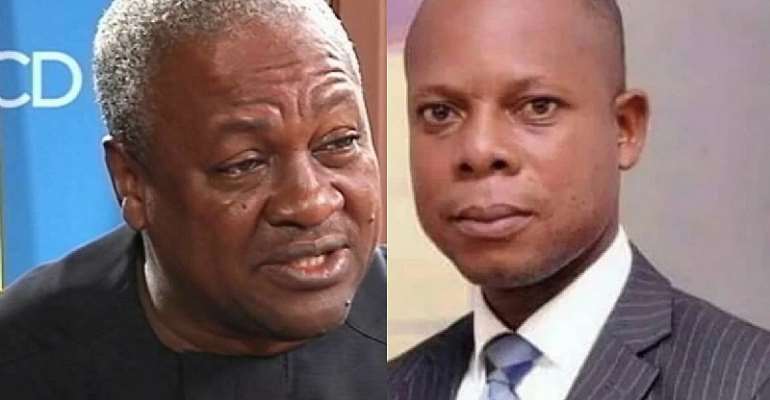 A Political and Security Analyst, David Agbee has asked former President John Dramani Mahama to stand by his 'do or die' comment.

He any attempt by former president Mahama to apologise and withdraw his controversial comment will dent his credibility as a strong and truthful opposition leader.

Sharing his view on the comment that has generated a lot of brouhahas, Mr Agbee, who is a doctoral candidate in international relations and diplomacy at the University of Ghana, explained that the 'Do or Die' comment is a usual team spirit phrase.

He said the usage of the word by the former President has been misconstrued as violent in nature.

"If he withdraws the statement, he must not be allowed to lead the NDC in the next election because he cannot protect his followers and Ghanaians in general.

"If he cannot stand by this simple english, then he is not fit to be the NDC flagbearer for the 2024 election.

"Qualified people must contest him for the flagbearership if he shows weakness by attempting to backtrack from the statement," Mr Agbee stressed.

In addition, he said the NDC executives should pass a vote of no confidence against him if he fails to stand by his words.

Describing those calling on the main opposition leader to apologize for the "do or die" comment as "rented hypocrites with academic and religious titles," he urged the former President to ignore the calls and stay focused.

"Where were these rented academicians and religious leaders when President Nana Akuffo Addo said "all die be die," and when 8 innocent citizens were killed in the 2020 elections through State-sponsored attacks? Mr Agbee quizzed.

He said Ghanaians need an action-oriented opposition leader to rescue the country from the growing trend of insecurity, corruption and underdevelopment, adding that the former President must be bold and fearless in speaking the truth about the ills in Ghana.

"He must stop trying to please people by being gentle. If Ghanaians were looking for a leader with the attributes of humility and gentleness, Nana Akuffo Addo wouldn't have become the President of Ghana," he emphasised.