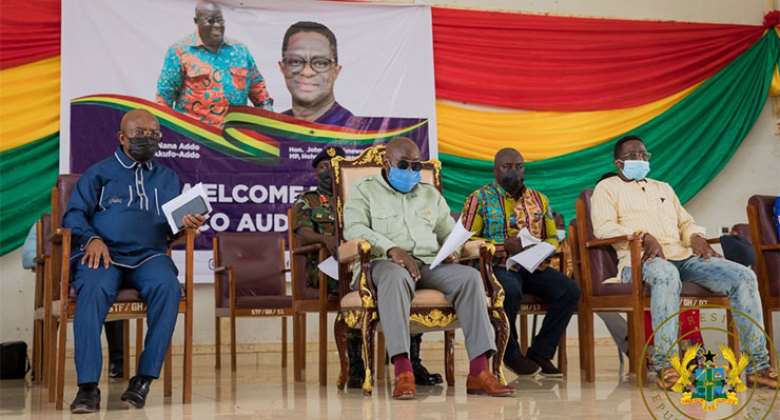 President Nana Akufo-Addo has described the New Patriotic Party's (NPP) victory in the Hohoe constituency during the December 2020 elections as a big breakthrough that will be replicated in other constituencies in the Volta Region come 2024.

“It is an important bridgehead we have been given by the people of Hohoe to extend our expansion into the region,” he stressed.

He said the Volta region in general has been a big problem for the party to deal with. Apart from a seat they won in Nkwanta North when the Volta and Oti was one region (then Volta Region), the party has never been able to win any seat in the central and southern part since the fourth republic (1992).

It was therefore gratifying that John-Peter Amewu was able to win the party's first seat in Hohoe, a stronghold of the opposition National Democratic Congress (NDC).

The President made the observation when he spoke on VOV Radio in Hohoe during his tour of the Volta Region last week.

He noted that although the Volta Region continues to be a big problem for the NPP, “I am a very persistent suitor. So when I talk about marrying the Volta region. I mean it. When I set my eyes or myself on a particular target, unless it's God, I do not give up.”

He therefore used the opportunity “to say a big thank you to the people of Hohoe. Because they have done something very dramatic. I did not win the Presidential votes here, but my candidate John Peter Amewu won the parliamentary seat. It is a big big breakthrough for us and for our party and the Volta Region.”

President Akufo-Addo revealed that the win was a reclamation of history, as Hohoe used to be a strong supporter of the UP tradition from which the NPP was born.

“It is true that those who are familiar with history will tell you that a long time ago in the early years of our independence. The years of CPP and UP. Hohoe was a UP stronghold. In fact the very famous Political figure, S.G. Antoh was a native and an indigene of Hohoe. He was a very close friend of Dr. Dankwa and Dr. Busia. They all worked together.

“So if you like what we have done is to recapture our history. It is a very important breakthrough for us. We have not so far had a seat in the Volta region except for the previous Northern Volta which is now Oti region.”

Sources in the party say the NPP is working to win two additional seats out of the 18 seats in the region.

President Akufo-Addo also thanked the Hohoe people for giving him what he described as “this very dynamic personality, John-Peter Amewu as your MP.” He added that “he is a hardworking and important member of my government. Who is a key contributor to government discussions and decisions.”

He appealed to the people to continue to support and assist him to deliver more development to the area, because there is more Mr. Amewu can offer. “If you continue to stand behind him, I have no doubt that you will continue to see positive transformation of the constituency.”