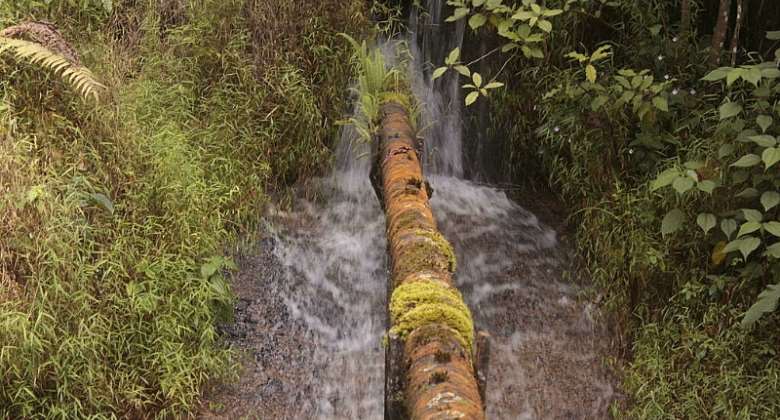 At a stream in the Bomaka neighbourhood of Buea, Cameroon, Emerencia Fosuh is using sand to wash her twenty-liter gallon jerrycan before filling it with water.

Fosuh, a hairdresser, has been using the stream - called 'Mr Peter Water' by the locals - for the past four years as her only source of water for drinking and household use.

“I'm getting this water for bathing, and if I have to use the toilet, I will beg water from my neighbors,” she tells Africa Calling correspondent Batata Boris Karloff.

The jerrycan is heavy, and it's difficult to bring it up to her house, she says.

“I used to bathe even four times a day but now I can't lie, I will bathe just once. I've been here for four years and I am so tired of this-- I can't keep going to people's houses to ask for water because of this crisis,” she adds.

Many residents in this part of Buea, the capital of the anglophone South West region, have had no running water in their homes for years.

The four-year rupture in service, according to Malomba Esembe, the Member of Cameroon's Parliament for Buea Urban Constituency, was due to an industrial accident caused by ENEO, Energy of Cameroon.

“I was made to understand that around Molyko checkpoint, works were being done by ENEO to fix concrete pipes, led to the destruction of one of the main pipes that supplies water to that area,” he says, after looking into the matter and discussing with Camwater, the government supplier of water.

Students suffer, too
He's referring to Molyko, the large student neighbourhood that has a higher population than other parts of the regional capital.

For students on a tight budget, their only way of getting water is to order it from local businessmen, called 'truck pushers', who bring it from boreholes and sell it in the neighbourhoods.

University student Josiene Konyuy regularly orders water. She says she doesn't trust the source of the water she buys, but she doesn't have a lot of choice.

“The truck pushers carry water from borehole and since you do not follow them to carry the water, I don't trust the source. Given the fact that to buy a container of water is strenuous due to distance one has to cover, we just order for water from truck pushers and we pay a thousand francs,” says Konyuy.

The water lasts for four days, so she usually has to buy water at least twice a week, which is very costly.

“While we suffer to get water, some people are actually taking advantage of the situation to make money,” she adds.

It's a booming business, according to Frankline, a truck pusher, who just sold all his water for the day.

The truck pushers buy the water from the borehole owner and vary the price of water based on how far they have to bring it.

The demand is high, and he has more orders, so he needs to get more from the borehole. Although Frankline knows he is benefitting from the water crisis, he feels for the students who are forced to buy water like this.

“We are sympathetic with students because it is not normal for students to be buying water since water is a free commodity given by nature,” he says in Pidgin, noting that they already have a lot of expense for books and housing.

“We feel for them even as we receive their money, actually, but some of us have gone to school and there's no work, so that's why we are pushing trucks.  We plead with the government to look into the situation,” he adds.

Hairstylist Fosuh says she makes less money because of the lack of water.

“Like now, for instance. A lady came and said she wants me to put product in her hair. I told her that I can't because of the distance to get water. I just told her to look for another saloon,” she says.

She's lost a number of customers that way.
“Even if I come here to fetch water before getting home, I am already tired and I can't work. Some will want to wash their hair and style but I can't due to lack of water,” she adds.

Lack of water has also affected the effectiveness of dealing with the Covid-19 pandemic. One of the prescribed guidelines against the virus is to wash hands regularly with soap and clean running water. For some residents in Buea, keeping to this is not feasible.

“If you look around the town even the buckets placed at strategic points for persons to wash their hands are no longer present. In some institution the is just a bottle of sanitizer whereas we are advised to wash our hands regularly,” says university student Konyuy.

“It is really scarce to see a bucket to wash hands and this scarcity coupled with the COVID-19 guidelines is causing a lot of issues. Molyko carries the heart of Buea in terms of population, hence priority needs to be given here, but it's not the case,” she adds.

MP Esembe says that he has been ensured by Camwater that the repairs will be taken care of, although ENEO will be footing the bill.

“They have prepared an estimate of the repairs which has to be sponsored by ENEO that did the destruction,” he says.

Esembe says that Cameroon's President Paul Biya had taken a loan out with Xim Bank of China to expand water and distribution in the area.

“Buea, Tiko and Mutengene which will amongst other things see the construction of a treatment site in Mutengene so the government is doing what needs to be done and Camwater is in charge of implementing government policy—they're not sleeping,” he adds, speaking of the different areas in the region.

“If you go behind my house my drum is there waiting for rain, I am the one praying for this rainy season more than anybody,” says Fosuh.

“I actually need this rain because I don't have the strength to be coming here to the stream,” she adds.