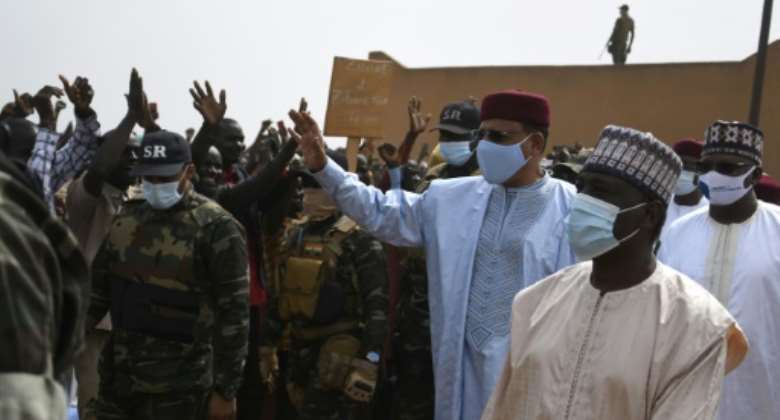 Niger's President Mohamed Bazoum, visiting the region for the first time since his election in February, says the army has gained the upper hand against the jihadists. By BOUREIMA HAMA (AFP)

"The terrorists killed our husbands, burned our food and stole our livestock," says Maimouna Moukaila, draped in a large white veil.

The attacks, with gunmen typically raiding villages aboard motorbikes -- and more lately, camels or even bicycles -- are increasingly raising the spectre of famine in Anzourou in western Niger.

Compounding the misery, Moukaila said, health workers have abandoned the area, and "many women have lost their newborns for lack of medical help".

The Anzourou region is made up of around 50 villages and hamlets, part of the Tillaberi, a vast area of 100,000 square kilometres (39,000 square miles) on the borders of Mali and Burkina Faso that is home to different ethnic groups such as Djerma, Fulani, Tuareg and Hausa.

The so-called "three-border" region straddling the frontiers of the three counties has long been troubled by land feuds, trafficking, desertification and fragile state presence.

"We sleep with our stomachs in knots and a hand on the heart," said Abdou Oumarou, from the village of Gadabo. "We jump at the slightest sound of a motor."

Anzourou Mayor Halidou Zibo, sporting Niger's national colours on his scarf, said: "The thefts, looting, granary fires and targeted killings are continuing. The terrorists shoot at anything that moves, including children."

A food crisis "is looming", he warned.

In March, the authorities returned around 12,000 Tillaberi residents to their homes, deploying heavily armed soldiers to protect them.

But things are far from back to normal.

The last massacre of civilians in Anzourou was on August 21 in the village of Theim, where gunmen arrived on foot and killed 19 worshippers in a mosque.

'The terrorists shoot at anything that moves including children,' a local mayor says. By BOUREIMA HAMA (AFP/File)

The assailants issued an ultimatum for residents to leave, and nearly 2,000 fled several villages to take refuge in Sara-Koira, authorities said.

"Those who dared to go into their fields were killed," said Hadjia Sibti, president of Anzourou's women's association. "They hunt us down in our huts and even in the mosques."

Resident Mamoudou Sabo, sporting a short white beard and faded yellow caftan, said he was afraid to venture out to his fields, preferring to stay in the relative safety of Sara-Koira, patrolled by soldiers.

Sabo called for even more security against the "damned terrorists".

The father of 11, who abandoned his 10-hectare (25-acre) farm, praised the generosity of Sara-Koira residents who have donated plots of land to farmers who have fled their fields, allowing them to grow millet, maize and beans.

Politicians in the Tillaberi region are demanding tougher security measures.

They say the jihadists had begun riding camels and bicycles instead of motorbikes, which had been banned in the region.

President Mohamed Bazoum made his first visit to the region on Saturday since his election in late February in Niger, one of the world's poorest countries.

Crowds in Sara-Koira await Bazoum, who vows to fight 'the problem at its root'; by shutting entry points to Inates, on the border with Mali. By BOUREIMA HAMA (AFP)

Speaking in Sara-Koira, Bazoum vowed to fight "the problem at its root" by shutting entry points to Inates, a town on the border with Mali which he said was the route the "terrorists" use.

At nearby Tondikiwindi, 100 civilians were killed in January by men who stormed in aboard motorbikes before fleeing towards the Mali border.

Two years earlier, in the same zone, four US special forces members and five Nigerien soldiers were killed in an ambush by the Islamic State group.

Since then, "the balance of forces has changed considerably" in favour of the army, Bazoum said.

He argued that the attackers have reverted to targeting "unarmed innocents", carrying out "large-scale massacres" in remote villages.