All-die-be-die vrs Do-or-die: now is the time to cease fire 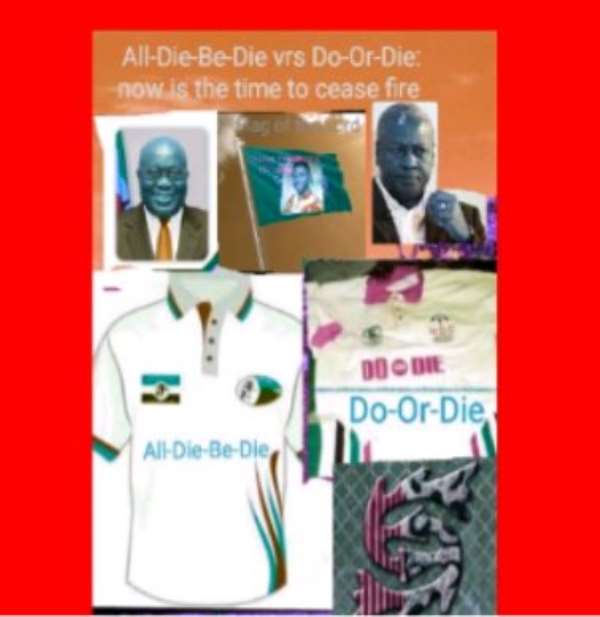 One day, a revered Seer passed near Kids' park at Goka. He saw two boys playing on a seesaw. The cheerful looks of the boys endeared them to the Seer, and one noted for his love for children, he got himself a seat under a serene shade to join the sport of the boys.

Upon looking at them up closer, and seeing the kind of friends that followed the two playing boys, the Seer noticed they were Nadaa and Jodram, the noble sons of the Prince of Goka.

Nadaa is older than Jodram, but the latter, the younger, is stoutly built, and heavier than his senior brother, Nadaa.

At first, the game was played according to its rules so beautifully, until it turned otherwise as follows:

As it's in the game of seesaw, one goes up and the other is scaled down, the heavy weight of Jodram got Nadaa up in the air, and for about a minute or a bit longer, he remained there paddling his legs as his kid brother laughed at him uncontrollably.

Jodram, clapped for by his friends who seemingly enjoyed the distress his senior brother was going through kept on pressing down his side, telling the brother he cared less if he fell and died, because, _"all-die-be-die"._

Still, the Seer stood at a respected distance and readied himself to catch to safety Nadaa if he was to fall. Even if he was to throw himself down on the grass to soil his white raiment.

The Seer observed Nadaa looked up the Heavens and prayed, and as if he was possessed by the strength of the Biblical Sampson, the elder brother forced down his side of the seesaw, and his heavier kid brother was now up in the air weeping to be rescued.

Still, the Seer looked on, and had in mind same strategy he was to use in saving Nadaa.

As Jodram cried to be brought down by Nadaa, the latter's friends applauded and teased him, and encouraged Nadaa to let him pay heavily the same price he was forced to pay earlier, now that the tables have turned.

Nadaa indeed was laughing the more at his younger brother who has now drenched his shirt with his tears.

He told Jodram to get himself down in a _"do-or-die"_ way.

With many attempts, Jodram couldn't scale up his senior brother, and the Seer seeing how tired Jodram was, he approached the boys with a carrot and stick.

The Seer said: _"you two noble sons of our Prince, why have you chosen a path that'll take the shine out of the sport I was enjoying? Why do you want to hurt yourselves in a game that rather should make you and your friends happy? Or you want to kill yourselves so a stranger inherits your father's rich estate and throne upon his death?"_

Turning to the friends that cheered on when the game turned dirty, the Seer scourged them with his stick by saying: _"you bad friends, why do you glorify evilness, playing a part that'll let your friends hurt themselves or possibly die. I'll tell the Prince to stop you from frequenting his palace or befriending his sons again"._

Nadaa and Jodram with their friends were ashamed of their behaviour, and repented of it, thanking the Seer for his wise counselling.

The game of the seesaw was now played as it should, and when the boys were out and about playing, they were cheered on by almost all the Goka people.

And as it was in the game of the seesaw, when the boys came of age, they alternated power upon the death of their father, the Prince. And there was no enmity between them. Throughout the time they ruled Goka, they brought prosperity to the people, and they were the envy of the neighbouring towns.

And their good example was cited in many history books for leadership.

Today, the game of seesaw is played in Ghana politics, and it's getting dirtier as we've read about in the forgone parable about the two boys.

Ghana's nascent fledgling democracy in the Fourth Republic is the envy of not only sister nations in Africa, but across seas onto other continents.

But why have we for some time now cheering on drums that beats divisive songs in our divisive partisan polity?

Why are we trading our relative peaceful atmosphere for incendiary rhetorics that will if not nipped in the bud erase the gains we've made?

Now is the time to cease fire.

We've enjoyed peaceful transfers of power in the Fourth Republic, and if we allow our tongues to sink that democratic feat, posterity will not inscribe the names of today's leaders in letters of gold when the history of our beloved Ghana is written again.

Ghana will not die.

Ghana will live to declare the glory of God Almighty.