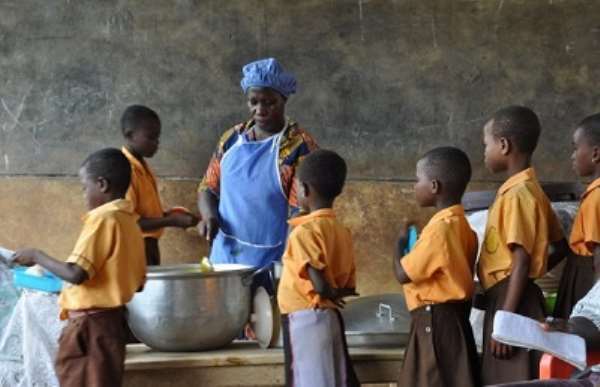 In addition, the petition wants Mr. Ebo Afful and Mr. Kofi Acquah, the headteachers of M/A Basic School and Tayido M/A Basic School respectively to be also arrested and prosecuted over the same issue.

According to David Forthgill Bentil, the petition is grounded on a news item published by 'The Hawk' newspaper on Tuesday, May 4, 2021 with a caption “Uncovering Sch. Feeding Contract Fraud Schemes.

He explains that after following up on allegation that the Central Regional Secretary of the NPP, Richard Takyi-Mensah had received an amount of Gh¢99,120.00 as payment for cooking for 472 pupils of Ekurabadze M/A Basic School and Tayido M/A Basic School, he uncovered that it was all a lie.

Apparently, the two schools in question have never been beneficiaries of the school feeding programme.

Shocked by his findings and the attitude of the headteachers of the schools, David Forthgill Bentil has filed a petition to the CID to arrest the NPP Secretary and the two headteachers of M/A Basic School and Tayido M/A Basic.

“I am consequently, by this petition, calling on your office to arrest, institute full scale investigations and prosecute where necessary, Mr. Richard Takyi-Mensah (NPP Central Regional Secretary), Mr. Ebo Afful (Headteacher of Ekurabadze M/A Basic School) and Mr. Kofi Acquah (Headteacher of Tayido M/A Basic School) for their roles in the alleged fraud which has cost the Nation and her poor taxpayers, a whopping Ninety-Nine Thousand, One Hundred and Twenty Ghana Cedis (Gh¢99,120.00),” part of the petition reads.

Below is the full petition from David Forthgill Bentil:

No machinations will break ordained Alan as NPP choice for 2...
46 minutes ago