The Large Footprint Of Small-Scale Mining In Ghana 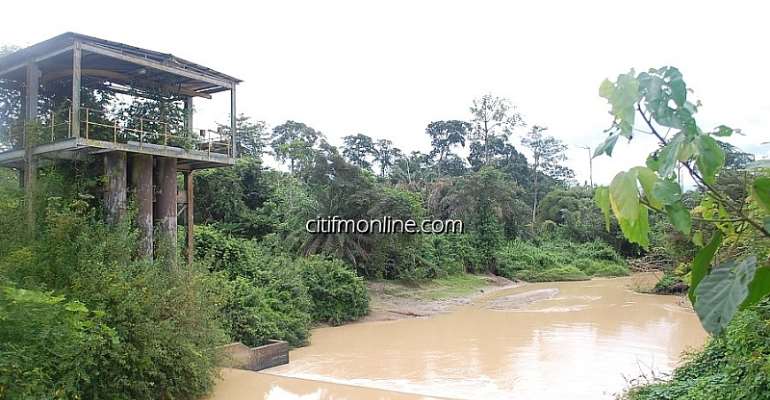 The above title was chosen by the United States National Aeronautical and Space Administration (NASA) as the “caption” to a remarkable photograph, taken from outer space, that shows, rather graphically, the areas of Ghana where galamsey has done the most damage to forests, rivers and other water-bodies.

A foreign aeroplane pilot had once warned me about the physical state of Ghana, as seen from the air. He said: “When you leave the airspace of the Ivory Coast and enter Ghana's, what strikes you most vividly is the difference in the condition of the landscape beneath your aircraft. The landscape of the Ivory Coast is green – you can see virgin forests, interspersed with blue, gleaming rivers and streams. It's beautiful.

“On the other hand, the landscape of Ghana looks as if it has been indiscriminately bombed from the air! There are craters all over the place, and the water in the rivers and streams is entirely yellowish. It gives one a weird feeling: as if one was flying over land that had been visited by creatures from outer space, who didn't know what vegetation and water-bodies were!. Or their contribution to the existence of life on earth! ”

I was hurt to hear my country described as one in which its own inhabitants had been treating it as extra-terrestrial monsters would treat it.. But then, I read a statement reported to have been made by ex-President John Mahama at Kyebi, capital of Akyem Abuakwa, a state in which gold abounds.

Mr Mahama was reported to have said that he went to Kyebi by helicopter, and on the way, he was saddened to see from the air that the land in the state had been badly dug up and ruined by galamseyers.

However, Mr Mahama, instead of intensifying measures he had initiated against the destruction (by setting up a “Task Force”) was reported to have later condemned the “brutal methods” used by his own Task Force to drive the galamseyers away! The galamseyers were "only trying to earn a living!” he is quoted as having stated. To no-one's surprise, the “brutal” Task Force was disbanded by his Government.

The methodology used by Mr Mahama seems to have set the tone for all future admnistrative actions to try stamp out the destruction caused by the galamseyers. A "Task Force", made up of soldiers and policemen (such as the one called “Operation Vanguard”) is set up and begins to chalk up successes in limiting the damage done to the land and water-bodies through galamsey.

But as soon as the Task Force is seen to be succeeding, an enormous socio-political campaign is launched against it by the galamseyers. They used political blackmail and social pressure to cause doubts in the minds of the administrators. Unspecified and unprovable charges of corruption are made against Taskm Force members. That's how Operation Vanguard was disbanded.

But as the galamsey destruction went on, the administration tried again to save itself the ignominy of being accused by future generations, of the crime of abandoning Ghana to selfish nation-wreckers. It now launched an all-military operation called “Operation Halt”. The soldiers engaged in this operation were authorised to burn on sight, bulldozers, excavators and changfang machines found at a specified distance in the vicinitry of rivers, streams and forest reserves.

But again, as soon as the operation began to achieve its objectives an gigantic and noisy was unleashed on it. Burning the equipment found near rivers and forests was “illegal” (said Operation Halt's detractors). The Government ridiculed the argument regarding the legality of the operation. But Operation Halt is being diluted in the name of finding "alternative" ways to enable the galamseyers earb a livelihood.

So, another “Task Force”, organised under the auspices of the Ministry of Lands and Mineral Resources, is -- ONCE AGAIN -- attempting to create machinery to stop the destructive practices of the galamseyers.

Ah? is it not the same statutory bodies-- especially, the Lands, Forestry and Water Commissions - - that sat idly by, as galamseyers rampantly caused the situation that turned Ghana's landscape into the extra-terrestrial oddity that can be observed from space by cameras carried by satellites?Can you safeguard a bank by giving the keys to itts vaults to bank robbers?

How can the “culture” created in, and by, the statuary bodies, encapsulating the issue of "licences" and "permits" to "approved persons", many of whom turned out to be interested only in selling such licences for money – how can this culture be changed overnight by its own creators?

Mind you -- the officials of these statutory bodies see Ministers come and go. But they, the officials, know how to survive. They write convincing reports for Ministers. They propose actions that seem to answer all the questions. But the end-result is always the same: effective action is killed by building into it, weaknesses that cannot be easily overcome in the field. Meanwhile, the rivers remain yellowish; the roads to food farrms are blocked and tomber escapes from the forest reserves.

According to a report accompanying the photograph of Ghanaian territory taken from outer space by NASA,

QUOTE: “The expansion of artisanal mining, or galamsey, has escalated in recent years. Many of these artisanal mines are not only harmful to human health due to the use of Mercury (Hg) in the amalgamation process, but also, leave a significant footprint on terrestrial ecosystems, degrading and destroying forested ecosystems... the 'Landsat' image archive available through Google EarthEngine, was used to quantify the total footprint of vegetation loss due to artisanal gold mines in Ghana from 2005 to 2019...

“Conversion of forested regions to mining has changed over a decade.... from 2007 to 2017. A combination of machine learning and change detection algorithms were used to calculate different land cover conversions and the timing of conversion annually. Within ….. south-western Ghana, approximately 47,000 hectares of vegetation were converted to mining at an average rate of 2600 hectares per year... A high percentage (50%) of this mining occurred between 2014 and 2017.

….”In addition to deforestation, increased artisanal mining activity in recent years has the potential to affect human health, access to drinking water resources and food security.”

The best that science can provide to us as a warning has been made available to us free on the Internet. Just verify it for yourself at: The Large Footprint of Small-Scale Mining in Ghana