Let Mahama ‘do or die’, ‘boot for boot’, he can never be president again 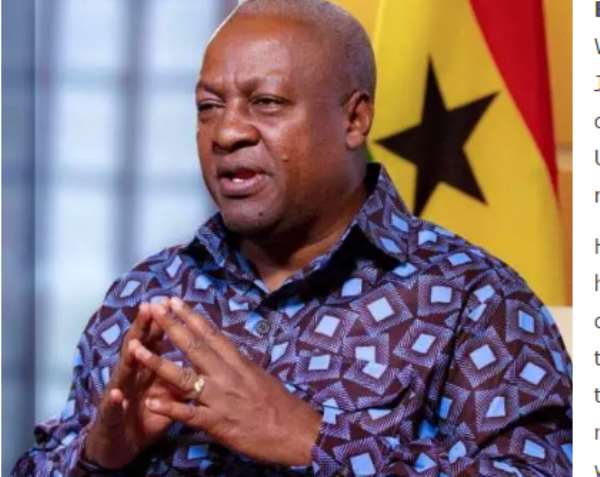 It is absolutely baffling to see former President Mahama moving heaven and earth to reclaim the presidency after being rejected by Ghanaians in two consecutive elections in 2016 and 2020 for his dreadful errors in judgement amid massive economic meltdown.

Somehow, former President Mahama’s desperation to return to power has resulted in all sorts of unpalatable pronouncements.

Take, for instance, a few years ago, the former president came out with seemingly incoherent response to the unfortunate incident which occurred during the Ayawaso West Wuogon by-election on Thursday 31st January 2019.

Ex-President Mahama, who was moving heaven and earth to reclaim the presidency in 2020, was reported to have pontificated somewhat carelessly: “We are not going to joke in 2020, and I’m sounding a warning to the NPP – we are going to match them boot for boot. “I want to sound a caution that NDC has a revolutionary root and when it comes to unleashing violence, no one can beat us to that. It is just that we are mindful of this country’s democracy and that is why we must be the first to respect it.”

Interestingly, however, during the 2020 general elections, the former president ‘booted for boot’, but was rejected once again by discerning Ghanaians.

As if that was not enough, in his early preparations towards the 2024 general elections, the former president has recently come out with another controversial pronouncement.

In a recent radio interview during his travels across the length and breadth of the country, the former president is reported to have said that unlike the 2020 general elections, the 2024 general elections will be a ‘do or die affair’(emphasis mine).

It is absolutely true that the former president and the NDC’s 2020 flagbearer, John Dramani Mahama, holds an unmatched record of being the first incumbent president of Ghana to be voted out of power in his first term in office.

It is also right in mentioning that former President John Dramani Mahama has held a panorama of important positions in Ghanaian politics.

Interestingly, however, on 7th December 2016, about 55.6% of the electorates expressed their disappointments in his performance as the first gentleman of the land by showing him the exit. He lost by a huge margin of over one million votes. Indeed, it was the first in the history of Ghanaian politics.

The reflective observers thus found it extremely bizarre when the former president decided to wrestle powering 2020.

The sceptics would thus quiz in amazement: ‘what can Mahama do differently at the presidency next time around’?

What appears more bizarre though, is that Ex-President Mahama and his teeming supporters are moving up and down the country and unfairly castigating President Akufo-Addo who is prudently fixing the massive mess left behind by the erstwhile Mahama administration.

Despite the unpardonable mismanagement which brought about his heavy defeat in the 2016 and 2020 general elections, the former president holds a faint hope that he will bounce back and recapture the power from the NPP in 2024.

The critics nonetheless insist that it will rather be easier for a camel to go through an eye of a needle than NDC returning into power anytime soon with former President Mahama, judging from the unprecedented economic mess he left behind.

Given the circumstances back then, we can confidently conclude that the 55.6% and 51.2% of electorates were not happy with former President Mahama, hence showing him the exit in the 2016 and 2020 general elections respectively.

The overarching question then is: what will make the unhappy 55.6% and 51.2% of electorates change their mind and repose their absolute trusts in Mahama in 2024, given the encouraging signs of auspicious economic growth under the NPP administration?

In fact, before the insidious coronavirus, the Akufo-Addo administration managed to move the economic growth from a disappointing 3.4% in December 2016 to a favourable 8.6%.

What is more, the double digit inflation (15.4% in December 2016) was reduced drastically to around 7.5% before the deadly coronavirus.

Since assuming power on 7th January 2017, the Akufo-Addo government has rolled out numerous social intervention programmes and policies to the benefit of all Ghanaians.

In addition, the Akufo-Addo government has judiciously distributed the national resources in the form of Free SHS, which paved way for more than 400,000 children a year, including the over 190,000 children who otherwise would not have the opportunity to enter senior high school.

Based on the prudence governance by the Akufo-Addo government amid the favourable economic outlook, some of us can confidently state that Mahama is on the verge of making another history in Ghanaian politics.