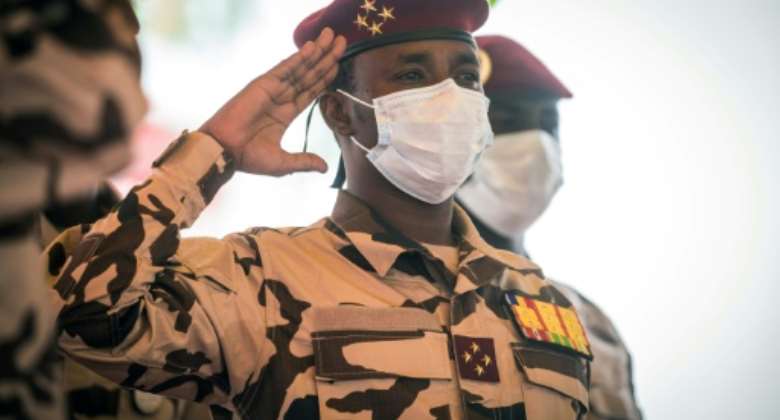 Deby at the state funeral for his father, Idriss Deby Itno, who ruled Chad for 30 years. By Christophe PETIT TESSON (POOL/AFP)

Chadian strongman General Mahamat Idriss Deby Itno will fly to Qatar this weekend, his office said Friday, heading to a country where a leading rebel lives in exile.

Deby took the reins in Chad after his father, 30-year president Idriss Deby Itno, was killed fighting insurgents in April.

The presidency's protocol department, without giving details, said Deby would make a "friendship and working" visit to Doha from Sunday.

He has recently made overtures to armed groups in the hope of coaxing them into a national reconciliation forum.

Timan Erdimi, president of the Union of Resistance Forces (UFR), a coalition of several rebel groups, has been living in exile in Qatar for roughly a decade.

In 2019, his fighters advanced on the Chadian capital in columns of pickup trucks, coming from Libya via Sudan.

They were thwarted in the northeast of the country by French air strikes requested by the older Deby, a long-standing ally of Paris.

Earlier this month, the UFR told AFP it did not "refuse the outstretched hand of the regime but was waiting for the first practical move".

After the death of the elder Deby, his son was declared president and commander-in-chief of the armed forces.

He has promised "free and democratic" elections after an 18-month handover period that is renewable.