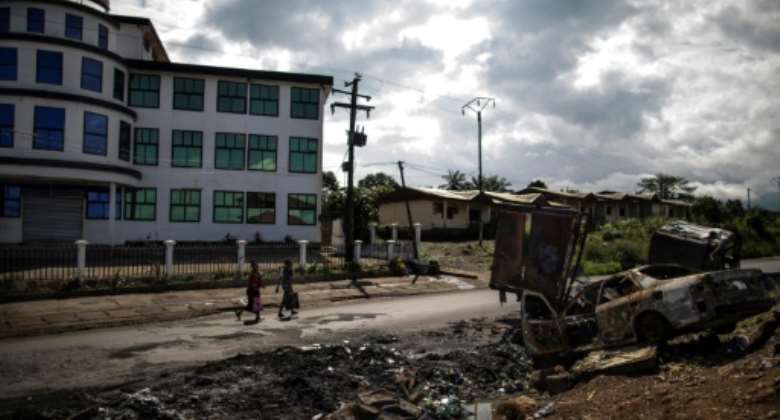 Violence: The aftermath of an attack in Buea, the capital of Cameroon's Southwest Region, in October 2018. By MARCO LONGARI (AFP/File)

Four suspected separatists in Cameroon's troubled anglophone regions have been sentenced to death over the killing of seven schoolchildren, the defence ministry announced on Friday.

A military court on Tuesday sentenced the four to "execution in public by firing squad," it said in a statement to AFP.

The seven children, aged between nine and 12, were killed in October last year when armed men opened fire on their school in Kumba in the Southwest Region -- one of two western regions gripped by a long-running breakaway campaign.

The four defendants were sentenced by a military tribunal in the regional capital of Buea for "acts of terrorism, hostility towards the motherland, insurrection and murder," the ministry said.

Western Cameroon is in the grip of a four-old conflict triggered by militants demanding independence for two predominantly English-speaking regions in the francophone-majority state.

Rights groups says abuses have been committed by both separatists and the armed forces.

Several death sentences have been issued against separatists in past years, although no execution has been carried out in Cameroon for more than two decades.

The presence of the anglophone regions in Cameroon derives from the colonial era.

Anglophones have repeatedly complained about perceived discrimination at the hands of the francophone majority, especially in education and law.

Demands for reform and local autonomy were rejected by Cameroon's veteran president, Paul Biya, culminating in the separatists' declaration of independence on October 1 2017.

Their self-declared entity, Ambazonia, is not recognised internationally.