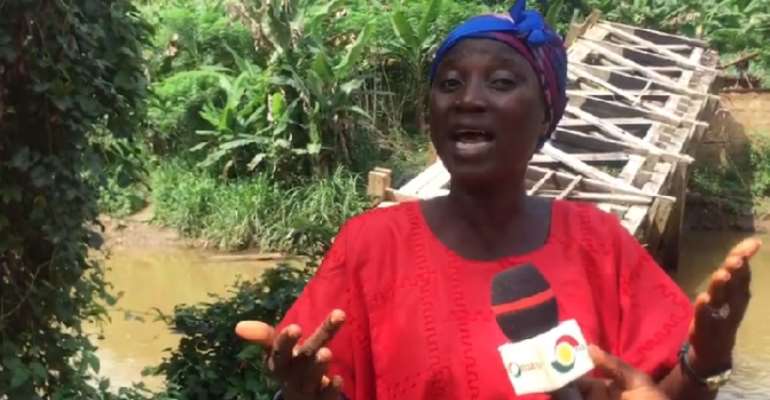 Residents at Okorase Domeabra in the Akwapem North District are appealing to government to reconstruct a bridge linking farming communities to the markets.

On Tuesday, residents mostly women and aged took to the streets to protest over the broken bridge making transportation of farm produce to the market unbearable.

According to the demonstrators, the collapse of the bridge coupled with poor roads has affected transporting of farm produce to market centers.

They said the situation has cut off farmers and residents at Koransa in the Suhum municipality.

Queen mother of Okorase Domeabra, Nana Oye Asiwa Ampem, narrating their ordeal said, the women have had to travel miles to the market due to the collapse of the bridge.

She said, so far about eight children have lost their lives as a result of the broken bridge.

"We are not here to fight government, but must hear us. We are tax paying citizens, with constitutional right to vote but authorities have ignored our plights despite the danger the bridge poses. We have been hoping to see authorities for once to discuss how to fix the bridge but all to no avail."

The footbridge linking the Okorase Domeabra community and the Kukuaa Koransa community collapsed weeks back agonizing their plight. As such, residents at Koransa nearby communities in the Suhum municipality have been cut off from a shorter route leading to long distance travels.

Other residents travel miles to access the nearest health center. Farmers in these areas grow cassava and plantain to feed parts of Eastern and Greater Accra Regions. The affected farmers want their footbridge reconstructed and roads reshaped for easy access.

They say, the bridge was originally constructed for cocoa farmers at Metieam by the Swizz missionaries in 1908 and maintained over the years but with time it got weak and has finally collapsed.