By Ananpansah, B Abraham (AB) 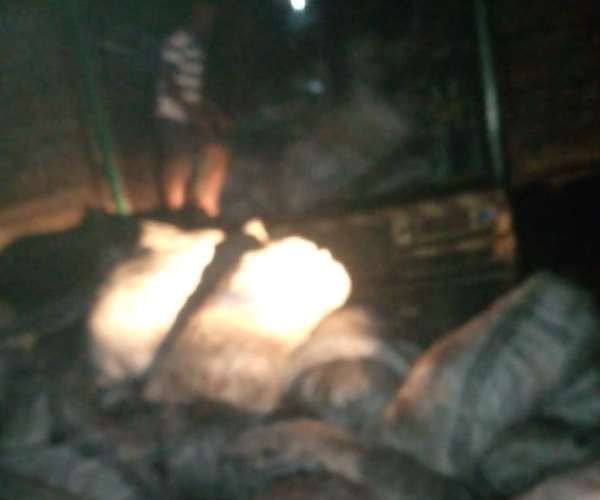 The Damongo Youth Parliament (DYP) together with the youth of Canteen in the West Gonja Municipal of the Savannah Region has seized bags of charcoal loaded in commercial quantities being smuggled out of the region.

A total of 550 bags of charcoal were impounded from a long vehicle believed to be bound from Kotito Number 2 to the southern part of Ghana.

The charcoal car was intercepted along the Canteen to Agric Offices road near the Canteen cemetery following a tip-off.

Upon a sober reflection and consultation with the key actors, the confiscated charcoal was given to the Canteen Women at no cost. All the women around took home atleast, a bag of charcoal.

The action of the aggrieved youth became necessary after the driver of the said long vehicle failed to own up for the fear that the car would be led to the Yagbonwura's palace and its content off-loaded.

The initial demand of the youth was for the driver of the long charcoal vehicle to unmask him/herself and move the vehicle to the Yagbonwura's palace were the charcoal will be unloaded for further decision and action.

The evasive mate to the driver provoked the hell out of the youth when he failed to disclose the whereabout of his boss compelling the youth to unladen the charcoal out of the truck.

Whilst the charcoal was being off-loaded, the buyer and the owner of the said charcoal appeared from the 'blue skies' and pleaded profusely and emotionally with the youth to give him the second chance. It was drama reincarnated at last!

He said he was ready to pay the youth any amount of money to be allowed to go, but the determined youth rejected the offer and carried out their action.

The desperate charcoal buyer who used the name of God and money to plead with the youth disclosed that he had already spent a lot on middlemen among others, adding that, his life will be ruined if the charcoal is confiscated.

It can be recalled that at a 'Regional Consultative Forum with the youth' on the Environment and Sustainable Development held on August 28,2021, the chiefs and youth adopted a resolution to clamp down on the activities of loggers and commercial charcoal burners in the various districts of the Savannah Region in an attempt to restore the fragile vegetative cover.

The stakeholders' dialogue was called at the instance of the Savannah Regional House of Chiefs and chaired by Buipewura Jinapor II, who is the chairman of the Yagbonwura's committee of Five Eminent Chiefs.

The youth groups in various areas were handed the power by the Committee of Eminent Chiefs and tasked to lead the enforcement of the ban, with the Buipewura charging them to confiscate any loads of charcoal spotted in the region effective 29th August, 2021.