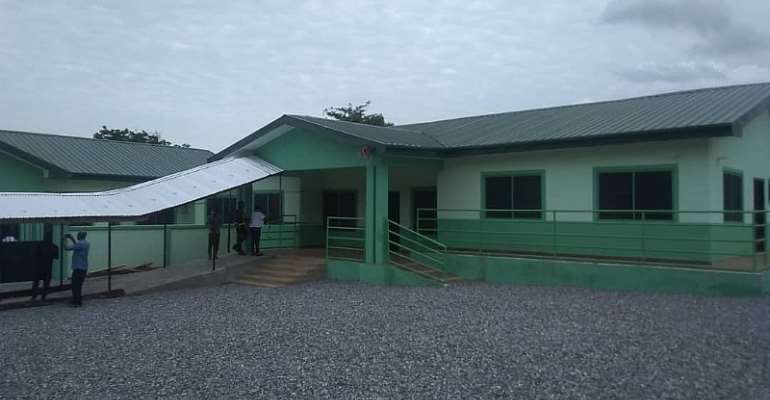 Residents of Asiri, a farming community in the Jaman North district of the Bono region, have been provided with a new health centre and a 3-unit bungalow built at the cost of Ghc 1,010,000 to boost effective care delivery in the area.

The facility, built by the Middle Belt Development Authority (MBDA), was funded through the Jaman North constituency’s share of the One million per constituency as promised by the then candidate Akufo-Addo ahead of the 2016 general election.

It has been stocked with some basic medical equipment such as refrigerators, portable pressure steam sterilizer, oxygen concentrator, examination lamps, thermometers and wheel-chairs, among several others.

The newly constructed Asiri Health Centre with a bungalow attached replaced an old dilapidated clinic without any beds for patients and accommodation for staff and could not handle many health cases.

The situation is however different as it now has the capacity to admit patients, provide ante-natal and post-natal services as well as attend to OPD cases in a much more effective and efficient manner.

An official of the Asiri Health Centre, Nicholas Adu Adjei noted that the facility has come as big relief to both staff and residents as it would go a long way to positively impact on effective health care delivery in the town and its surrounding communities.

He said the new facility would enable them to deal with cases that need to be admitted, especially malaria cases.

Other projects undertaken by MBDA in the Jaman North include a 6-classroom block for the Sampa Presby Primary school with office and staff common room constructed at the cost of Gh.c 425,500, CHPS Compound still under construction at Ponkor and a market shed completed at Goka.

The Chief Executive Officer of the Middle Belt Development Authority, Joe Danquah, told the media during his rounds in the Bono region that the One million dollar per constituency promised by President Akufo-Addo is meant to ensure that every part of the country gets its fair share of the national cake.

He stated that projects being executed by his outfit were arrived at after broad consultations with community members, chiefs, Opinion leaders, Members of Parliament, District Assemblies and other stakeholders.

Mr. Joe Danquah appealed to all the beneficiary communities to take good care of the projects, adding that more projects are on their way to help improve the living conditions of the people.

He however cautioned contractors who have left their project sites to return immediately to avoid sanctions.