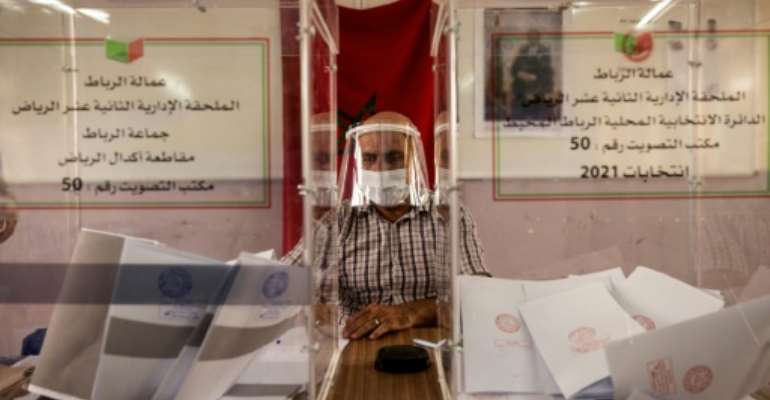 A voter casts his ballot in Rabat on September 8, 2021 in Rabat as Moroccans vote in parliamentary and local elections. By FADEL SENNA (AFP)

Moroccans voted Wednesday in parliamentary and local elections, as the incumbent Islamists who have governed the kingdom since the Arab Spring uprisings raised allegations of "serious irregularities".

"We're very concerned as we watch the progress of the national election. We've seen several irregularities," the Justice and Development Party (PJD) said.

The party said there were "obscene cash handouts" near polling stations and "confusion" on some electoral rolls, with some voters finding they were not listed.

It called for "swift and severe" intervention from the authorities "to avoid tarnishing the transparency of the elections".

Allegations of vote-buying had already flown in the final days of the two-week election campaign, which unfolded with no major rallies because of the coronavirus pandemic.

There was no immediate indication of the final turnout, but around 36 percent of the 18 million entitled to vote nationwide had done so by 5:00 pm, the interior ministry said, with 395 MPs' seats and more than 31,000 local and regional government jobs at stake.

"Everyone to the ballot boxes!" urged local daily newspaper the Economist, noting that turnout represented the "real stakes in today's polls" after only 43 percent of eligible voters cast ballots five years ago.

Timeline of successive prime pinisters in Morocco since the accession of Mohammed VI to the throne in 1999. By Kenan AUGEARD (AFP)

"Today is an important day for Morocco. I am voting because it is my duty," voter Abdallah Jawad Slaoui said in a polling station in the economic capital Casablanca.

The election comes as the tourism-dependent economy makes a patchy recovery from a pandemic-induced seven percent contraction last year, and enthusiasm is limited in a country where the monarchy retains key decision-making power.

King Mohammed VI will name a prime minister from the party that leads the parliamentary poll to govern the nation of 36 million for the next five years.

Swept to power in the wake of the 2011 uprisings around the Middle East and North Africa, the PJD hopes to secure a third term leading a ruling coalition.

Compared with demands back then for an end to "corruption and despotism", this year's two-week election campaign was less lively.

In the final days, however, PJD and its close rival the National Rally of Independents (RNI) exchanged heftier blows.

"The head of government must be a political personality with integrity who is above suspicion," he said.

Akhannouch, who is said to be close to the royal palace, retorted in an interview on Monday that the attacks were "an admission of failure" by his opponents, vowing not to respond.

Following the last elections in 2016, the RNI leader secured critical ministerial jobs for his party, including the economy and finance and industry portfolios.

Moroccam Abdellatif Ouahbi, the president of the Authenticity and Modernity party, casts his ballot in Rabat. By FADEL SENNA (AFP)

Besides the PJD and RNI, the liberal Authenticity and Modernity Party (PAM), formed by an influential royal adviser, and the centre-right Istiqlal Party are both seen as front-runners in local media.

PAM claimed in the final days before the ballot that RNI was buying votes -- denied by Akhannouch's party.

The tepid campaign has frustrated some voters and expectations for turnout were low.

Whatever the result, political parties are expected to adopt a charter for a "new model of development" with a "new generation of reforms and projects" in the coming years, the king announced recently.

All parties are expected to sign up, regardless of who wins the election.

The plan's major aims include reducing the country's wealth gap and doubling per-capita economic output by 2035.