I'm speaking to those who wish coup d'état in Ghana 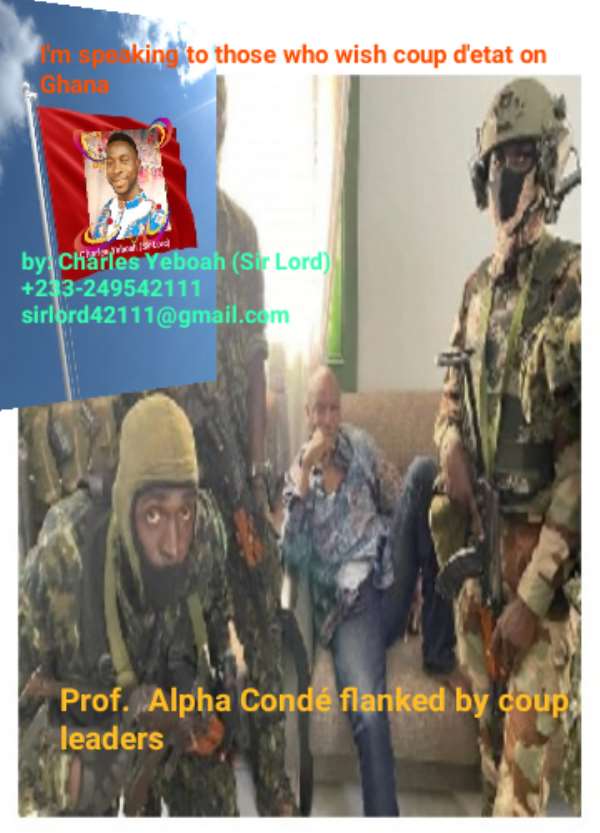 One day a rich merchant passed through the streets of Goka. His eyes fed on a beautiful maiden, and he instantly loved her.

The rich merchant approached the maiden and proposed to her of his intent to marry her and be settled in a gilded decorated mansion.

Even in the face of a show of opulence in such riches, the beautiful maiden rejected the advances of the merchant with contempt, telling him: _"you're not even bold to win my heart, for you even shiver and can't look me in the eyes as you woo me for my love. I look for a brave and intelligent man to settle me down as his Queen, who will exploit and harness the betters in me for our collective growth, not a stranger such as you I know not of your history and how you amassed your wealth, whether it was through fair or foul means"._

The rejected rich merchant was angered by the response of the beautiful maiden. And he stalked her stealthily to see the house she entered, her home.

As night fell, and all heaven's creatures retired to their sleep, safe the witch and the wolf that passed the streets, the rich merchant armed himself with pebble, and hurled it to the compound that housed the beautiful maiden, intending to brake her head and disfigure her to be unattractive to any other man.

The pebble hit a target, and that target gave a shrill cry, prompting the rich merchant to take to his heels, with an air of accomplishments, that the maiden had been bloodied with his stone.

Morning came fast, and with it revealed the exact target who suffered the might of the pebble.

It was a woman, and she was in that house as a patient receiving healing from the father of the beautiful maiden who is a physician.

The injury to the woman was so severe, so the physician had to call a relative of the wounded woman to come and help convey her to a bigger facility for surgery.

The call went through, and a man answered. When he was told of the incident, he rushed to the injured woman, and discovered it was her mother, for whom he'd entered Goka the previous day to look for, and got blinded by the beauty of the maiden.

The merchant cried, and hurriedly arranged for his mother to be conveyed fast to that bigger facility. But the frail woman gave up a ghost on their way.

There, the rich merchant owned up, and confessed of his crime - killing her own mother with his folly.

He was arrested by the law enforcers and suffered the penalty for such crime and the intents.

The beautiful maiden however was thereafter wedded to a man after her heart, and their matrimonial home became the envy of all couples.

He who throws a pebble to the crowd wouldn't know whose head it'll hit.

Today, citing the successful coup led by Mamady Doumbouya to oust Professor Alpha Condé of Guinea (Conakry), some Ghanaians, albeit unpatriotic Ghanaians who know little about arms insurrection to force a democratically elected government from power are wishing same on us to destabilise our relative stability, intending to short-circuit our nascent fledgling Fourth Republican democracy that's the envy of our neighbours.

Fuelled by ignorance of what occasioned the Guinea coup, the doomsayers cite economic hardships as their reasons to wish instability and anarchy on Ghana.

They're not reaching out to the political books to learn that, Professor Condé, following the many power drunk African politicians, altered his country's constitution to elongate his stay in office after his legally mandated two terms, after enjoying the privilege of being the first person to be transfered power to democratically in a coup-prone - country.

Those who wish the recent fate of Guinea to be Ghana's, I tell you in your face that, do bow your heads in shame. Your country Ghana since gaining Republican status has suffered ten successful and failed coups, with casualties in Kwame Nkrumah, K.A Busia, Hilla Liman. ..name them, and none took us to the desired promise land.

Here we're, carefully guarded Fourth Republic, with unfettered access to franchise, why don't those wishing to come to power exhaust same democratic process and influence a regime change they desire?

Isn't our thumbs more useful to cast our ballots than to use it on a trigger of a gun that can't clearly choose its target, be they of tribe, faith, gender or orientation?

May the cool waters of democracy rain down from the heavens and wash away the filthy hands of any dictatorship our brothers in Guinea may grapple with following recent events there.

As a proud Ghanaian, praying to be counted amongst the builders of a better and prosperous Ghana for today and posterity, I'll always advocate for brain power, and throw mud at a blow power that'll seek the hand of a beautiful maiden Ghana for a wife.