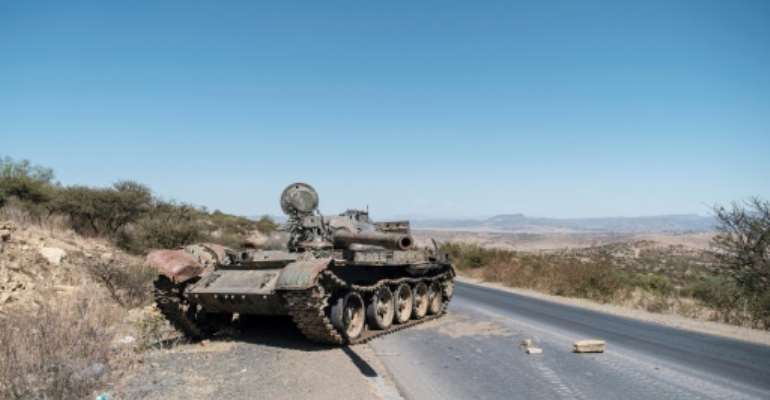 Fighting: A damaged tank pictured on a road north of Mekele, the capital of Tigray, in February. By EDUARDO SOTERAS (AFP/File)

The UN on Tuesday denied claims that refugee camps in Sudan were being used by Ethiopian rebels as a bolthole after Ethiopian officials said fighters had been caught with refugee ID cards.

Tens of thousands of Ethiopian refugees have streamed across the border into Sudan since war broke out 10 months ago in Ethiopia's northernmost Tigray region, exacerbating tensions between the two Horn of Africa neighbours.

Although the 2019 Nobel Peace Prize winner vowed a swift victory, the war has dragged on and spread into the neighbouring Afar and Amhara regions.

"All of its attempts in these areas have proven futile but new evidence has come to the surface. Some TPLF soldiers infiltrating from the Sudanese side, have been captured carrying UNHCR ID cards."

A UN official told AFP Tuesday that UNHCR was aware of reports alleging Ethiopian refugees registered in Sudan were now involved in the conflict but said the agency was "not in a position to verify" them.

"Since the onset of the refuge influx, measures were put in place at border entry points and all identified armed elements seeking refuge have been disarmed and separated from the civilian population," the official said.

"Allegations of military training taking place at the refugee camps are unfounded," it added.

The official said UNHCR was working to maintain "the civilian and humanitarian character of asylum" but it was not the agency's role to determine whether those returning home had participated in any fighting.

Relations are frosty between Khartoum and Addis Ababa, with the two countries at odds over the Tigray conflict, the Grand Ethiopian Renaissance Dam (GERD) on the Blue Nile and Ethiopian farmers' use of a fertile border region claimed by Sudan.

Last month Sudan recalled its ambassador to Ethiopia, saying Addis Ababa had spurned its efforts to broker a ceasefire in the Tigray conflict.

Last weekend Sudan denied Ethiopia's claim that an armed group had crossed the two countries' shared border into the region where the GERD is located.

Sudan also said it has "full control" over its borders and "does not allow for its border to be exploited" by any side of the conflict in Ethiopia.

On Sunday Sudan's SUNA news agency reported that weapons were seized from an Ethiopian Airlines passenger flight landing in Khartoum amid suspicions they were "meant to be used in anti-state crimes, to impede the democratic transition, and prevent transition to civilian rule."

Yet Sudan's interior ministry said Monday the shipment which belonged a license trader was "legitimate".