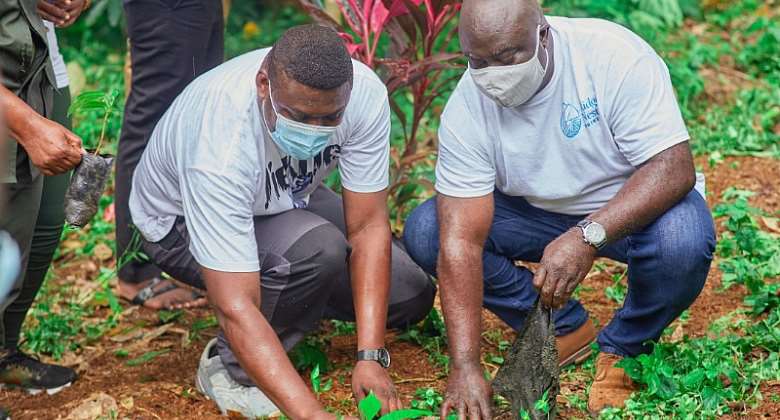 Ridge Nest Hotel (RNH) has initiated a project in afforestation as part of a Corporate Social Responsibility (CSR) activity to promote eco-tourism in Ghana.

According to the Ghana Investment Promotion Center, GIPC, the hospitality, and tourism sector were the fourth-best sector in revenue generation to the tune of $3.54 billion, which was 5.5 percent of the nation's GDP.

This gets strengthened even in the face of the covid-19 pandemic with solid hopes for the benefits of Africa Continental Free Trade Area (AfCFTA) on tourism and hospitality industries.

To take advantage of the eco-tourism sector, Ridge Nest Hotel over the past weekend with the state of the art facility situated directly opposite the Okere district assembly office in Adukrom Akuapim as part of its Corporate Social Responsibility has embarked on an afforestation project where they have planted close to 2700 trees with over 13 species.

This exercise took place at one of the tourist sites, "Sacred Groove," in Apirade, one of Okere District's traditional towns.

Speaking to Scofray Nana Yaw Yeboah, the consultant of Ridge Nest hotel, he said although new in Adukrom and the Akuapim ridge, it has purposefully earmarked about 22 locations including Asenema falls, Abonse slave market, Boti & Akaa Falls, Akonede shrine among others as the hotel's dedicated tourist sites for their guest on vacation.

For this purpose, he noted that RNH is investing in a strategic tree planting exercise to conserve some of the 22 cited locations to promote eco-tourism.

He shared a heart-touch philosophy behind the eco-tourism drive; during the clearing of the land for the hotel project, a bird nest came out of a palm tree that had to be cleared. It meant that a bird had lost its home because of the hotel construction, and as a hotel that prides itself as "home with nature." So they decided to commit their CSR to afforestation to promote eco-tourism and, in wisdom, provide the bird and its kind to build a nest in the planted trees.

He added that it is to allow eco-tourist to identify various kinds of trees when they visit such locations that the afforestation exercise has been going on. So, for example, at the "Sacred Groove," there is Rosewood, Prekese - Tetrapleura tetraptera, Acacia, Palm tree, Mahogany - khaya syngalenses, Teak - teaktonia glandis, Nutmeg - myristica fragrans, Cinnamon - cinnamoum zeylanicum, Ofram - Terminalia superba, coconut, orange, mango, etc.

According to hhim, the Hotel and the district assembly are jawjawing to form a robust partnership giving Asenema fall some facelift. Since the Hotel also believes in education, it has committed to donating eight (8) computers to the yet-to-be commissioned Junior high school built by the assembly at Asenema township.

Scofray took the opportunity to commend the Ghana Forestry Commission officers in charge of the district for the project coordination for such an initiative. In addition, he said, Madam Joyce Asare and her team were instrumental in making sure RNH does the right thing in the seedling acquisition, planting, technical direction, etc., to conform with best practices in afforestation, especially when the focus and end-benefits is eco-tourism promotion.

The name "Sacred Groove" is assigned to the location in Apirade by Chiefs and elders in conjunction with the Okere district assembly to preserve the rich history of the site. It is established that the legendary Okomfo Anokye used the place as his hide-out and resting place. He communes with the ancestor for his esoteric powers to perform a series of wonders. It has the rock with Okomfo Anokye's foot and spins print; it is an area where most of the ancient leaders and chiefs of the town were buried.

One of the rooms of the hotel

Participating in the tree planting exercise was the District Chief Executive ( DCE) of Okere, Honourable Daniel Nana Addo Kenneth; he stressed that the assembly is so grateful to Ridge Nest Hotel for committing their corporate social responsibility towards afforestation to promote eco-tourism in the district. When RNH knocked on my door at the assembly and heard their plans to promote eco-tourism, I led the assembly to marshal all the support to make sure their initiative comes to stay. Again, he said that he has a personal leadership vision to unearth all potential tourism locations in the district and has opened his doors to businesses with such goodwill of RNH as a way to viably position Okere on the global map of tourism and also provide jobs for the teeming unemployed youth in the district.

Ridge Nest Hotel's cliché "home with nature" is not just a fluke; waking up to the sight of the Akuapim morning fog across the ridge and chipping from birds is breathtaking and therapeutic, a swimming pool, spacious conference room, floral environment, bar terrace that gives you ariel view of the ridge.

Their kind of localized continental cuisines makes it a place for relaxation for all purposes coupled with very historical sites such as sacred groove, Abonse slave market, Okomfo Anokye family house, Akonode Shrine, Presbyterian College of Education formally known as Presbyterian teacher training college which happened to be the second oldest tertiary educational institute in West Africa, Cedi Beads, Boti falls, Asenema falls, etc. All these are to provide luxury on the ridge experience for their clients far and near.

After the tree planting exercise, the staff, the management of RNH, and the district's leadership paid a courtesy call on the Omanhene of Apirade traditional area. Nana Saforo Okuampah III, in his welcome address, expressed his total support for the eco-tourism initiative by Ridge Nest Hotel and has committed to releasing a parcel of land to the management for golfing. He said this gesture is part of the traditional authority's drive to promote Apirade and Okere District tourism.