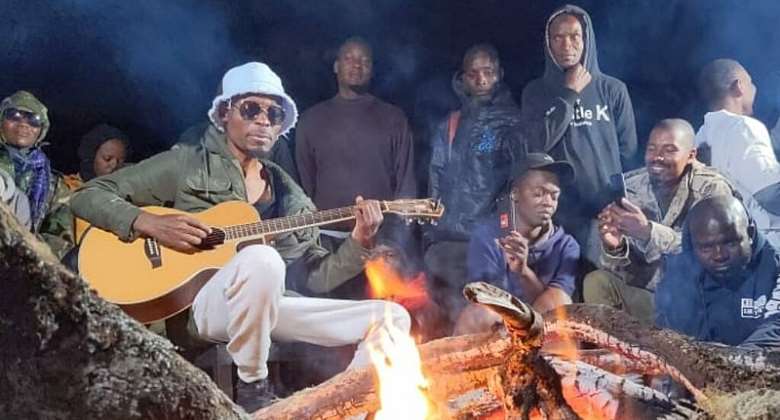 When Lawi, a popular Malawian afro-jazz artist put out a call for people to join him on a trek up Mulanje mountain he did not anticipate the overwhelming response he ultimately received.

About 100 people showed up, including senior government officials, in what has been described as the largest single local group ever to hike the mountain.

“I'm very excited, because today is such a big day because we not only going to go up Mulanje mountain but also to send very important messages about conserving and protecting our natural resources and environment,” Lawi, whose real name is Francis Phiri, told the Africa Calling podcast while negotiating a steep rock.

Mulanje mountain was nominated as a forest reserve in 1927. The massif measures 26km by 22km and of special interest is the highest peak which is 3000 metres above sea level. But the unique natural structure with its exclusive flora and fauna is under threat, primarily from human activities.

Timber from Mulanje cedar is much sought after. The wood is poisonous to termites and is also rot-resistant. So, loggers have been stepping in to profit from the trees.

Switched on: Malawian innovators get a helping hand from science university

Charcoal burning and encroachment are also factors that have put the forest in danger.

Lawi was appointed earlier this year as the official ambassador for the mountain by the Mulanje Conservation Trust (MMCT) — a body that protects and promotes the biosphere with all its natural resources.

He led the hike in the belief that the interest generated will spread the message about the damage that has been done and encourage people to conserve the mountain.

Mulanje is one of southern Africa's critical ecological hotspots. The large rocky mountain, commonly referred to as an 'Island in the Sky', has taken a beating, due to severe deforestation and degradation. This has led to the sharp decline of flora and fauna that cannot be found anywhere else in the world.

“I really believe that the mistakes that we have made as humans are what have led to the current state, in which our natural resources are, and it is time for us as human beings to take responsibility for the mess that we have caused,” said Lawi.

He said nature plays a role in peoples' everyday lives and that he constantly turns to nature for inspiration.

“As an artist, as a musician, I'm inspired by nature,” said Lawi, speaking on the trail up Mount Mulanje.

Hiking a mountain as big as Mulanje is a taxing endeavor and more so with 100 people. The hike started with a one big group going up the gentle slopes through the forests. They started with radiant faces and friendly chants. But as time went by and the slopes become steeper, the people drifted apart forming small groups each according to their stamina.

Slowly, the forest gave way to rocky outcrops, high grasslands, deep gorges and powerful rivers as we gained more ground. The sound of birds and insects filled the air. The peaks are steep and rocky, and range in difficulty from moderate hikes to technical scrambles.

After almost five hours of walking with occasional rests and snacks, the group stopped at Chisepo hut for the night. This is one of the 10 huts on the mountain that provide shelter for all hikers on their way to the highest peak.

It would take another three hours the following day of navigating through the boulders and on occasion crawling on all fours to reach Sapitwa, the peak. During the journey, the hikers reflected on why the mountain needs to be saved.

“The reason that I am taking part in this event is that we've grown up hearing stories about Mulanje and how the mountain used to be. But now the situation has changed,” said participant Wasili Chibalaka, who is 29.

“The trees that used to be unique to this mountain have been cut down. So, when I heard about these guys who are trying to come up with the initiative that will help conserve the status of the mountain, I saw it as a good event and decided to take part,” he added.

Others consider it part of their national heritage like Zipporah Kaunda, a 30-something from Blantyre.

“I believe this is our treasure in Malawi and other parts of southern Africa. So it's a tourist attraction and is the best place for those who really like to come and experience nature,” she said.

Killing Mulanje cedar
Before the hike, MMCT Conservation Director Carl Bruessow advised the group to preserve the walking sticks which are made from Mulanje cedar. Next time, they may not be available, he said.

Kondwani Chamwala, Information, Education and Communications Officer for the Trust, described how the mountain has changed over the years.

“Mulanje Mountain has species that are not found anywhere else in the world." There are between 250 and 500 unique species.

"And one of them is famous Mulanje Cedar -- we call it the nation tree.

“It occurs naturally in the mountain and at the moment we don't have enough cedar that can produce enough corns that we can continue planting in the mountain,” he added.

To address this emergency, MMCT engaged the surrounding villages by providing financial incentives to plant cedar trees and protect them. A record number of 800 trees has been planted to help the reserve.

“Mount Mulanje is one of the most beautiful physical features of Malawi, it is a God-given resource from which Malawi can reap significant dividends,” said Michael Usi, minister of Tourism, Wildlife and Culture who also took part in the event.

Usi said he would like to see “an immediate stop to any behavior that destroys the beauty of the Rocky Mountain in whatever form.”

At the top of Mount Mulanje, Lawi performed one of his hits, “The Whistling Song”.

After the fireside stories, discussions and performance, participants spent the night at a campsite in the shadow of the peak before hiking back down the mountain. The whole trip took three days, but the organisers are confident that this event will be the beginning of raising awareness in order to protect Malawi's natural heritage.