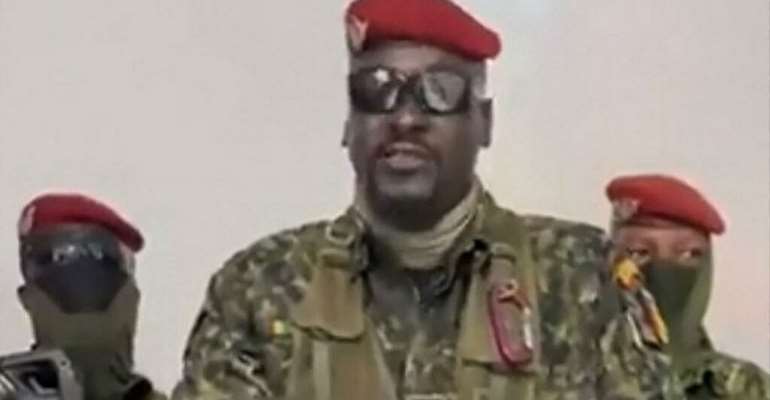 A sensational coup d'etat in the west African nation of Guinea was led by Lieutenant Colonel Mamady Doumbouya, head of the army's Special Forces Group. So what is known about the man who turned on his boss, President Alpha Condé?

A Malinke from the Kankan border region near Côte d'Ivoire and Mali, Doumbouya first became known to Guineans in 2018 when he appeared at a military parade in Conakry to celebrate the country's 60th independence anniversary.

He was put in charge of the newly formed SFG elite team – whose remit was to fight terrorism and maritime piracy. Wearing red berets, sunglasses and striking uniforms, they made a strong public impression.

The Lieutenant Colonel's problems with Conakry's leadership reportedly began when he was prevented from giving the SFG autonomy from the Ministry of Defence.

Author and geopolitical specialist Mamadou Aliou Barry, who heads the Centre for Analysis and Strategic Studies in Guinea, said the elite forces had also been used to repress public demonstrations.

“I think he (Condé) wanted a security instrument at his disposal for specific repressive missions," Barry told RFI's Christophe Boisbouvier.

"Unfortunately for him, when he wanted to get his hands on it, the command of the special forces turned against him.”

Military master
Doumbouya, 41, was in the French Foreign Legion, where he rose to the rank of master corporal before being called to command the SFG.

A graduate from the École de Guerre war college in Paris, he has more than 15 years of military experience that include missions to Cote d'Ivoire, Djibouti, the Central African Republic, Afghanistan and elsewhere.

Doumbouya is an expert in defence management, command and strategy – having also undergone specialist training in Israel, Senegal and Gabon.

A spokesperson from Guinea's Ministry of Defence described him as a "colossus with an impressive physique".

Call to 'end the misery'
On Sunday, draped in a Guinean flag, Doumbouya announced the arrest of Condé, the dissolution of Guinea's institutions and the suspension of the constitution.

Regional political leaders were to be replaced by garrison commanders, while ministers were summoned to a meeting on Monday morning.

In an interview with RFI sister station France 24, Doumbouya said the army did not want to “play games”, but to ensure that all Guineans could live together and “enjoy the benefits” of the country.

“The whole army is here from Nzérékoré Conakry to help rebuild this country,” he said, adding that Condé was safe and had access to doctors.

“We have all of the security forces behind us to end the misery of the Guinean people once and for all.”