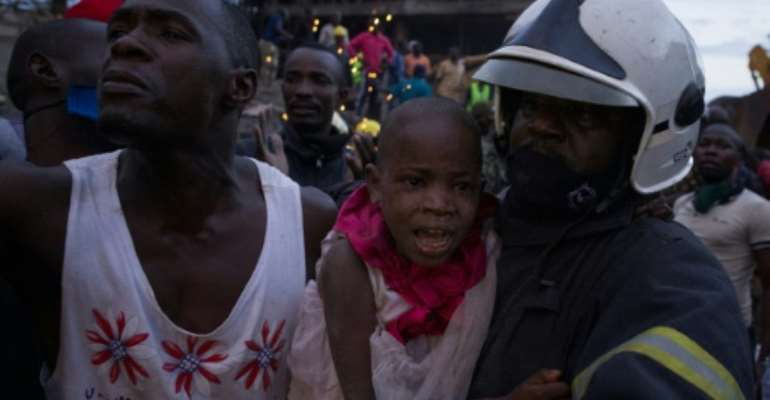 Rescuers in Kampala called off the search for survivors on Monday after six people were killed in a building collapse during a heavy rainstorm, police said, following an emergency effort that saw eight people including two children pulled to safety.

Images posted on social media on Sunday showed construction workers and passers-by digging through debris with their bare hands and firefighters using cutting equipment to saw through buckled metal in a bid to reach people feared trapped.

Six bodies were pulled from the rubble of the four-storey building under construction, while two girls aged five and nine were found alive and taken to Kampala's main hospital.

Police spokesman Luke Owoyesigire told AFP that emergency workers had ended their search and rescue operation after working late into the night.

"We are done. We don't expect to recover any more people dead or alive," he said, adding that four of the fatalities were female.

"Today we won't be back since what is left is for the trucks to carry the debris away," Nakasiita told journalists.

The building is next to the usually crowded Kisenyi Bus Terminal, a key transit hub in the Ugandan capital.

Nakasiita had earlier said there were fears that motorcycle taxi riders and others may have sought shelter from the rain in the building and could be buried under the collapsed structure.

Construction site accidents are common in Uganda, where health and safety regulations are lax.

13 Nigerians who engaged Police in gun battle at Weija reman...
8 minutes ago