Who are Frontiers Healthcare Solutions Services Limited at Kotoka International Airport? Who owns this company? 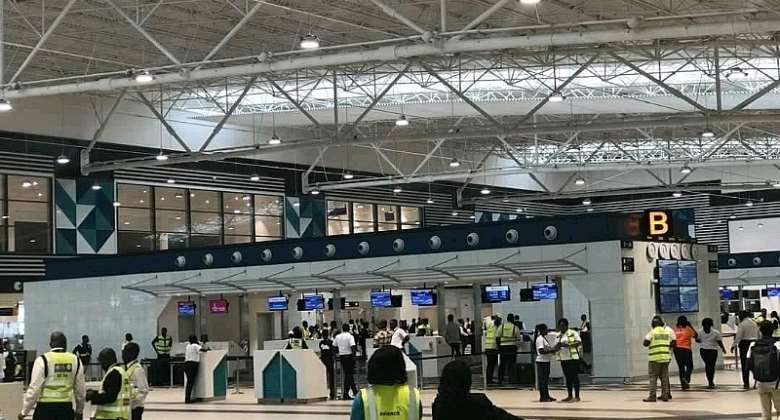 It may sound trite to probe the ownership of this strategic company that provides COVID-19 service at the Kotoka International Airport. But the apparent profit-making that is taking place begs the question as to who owns the company: Does the Ghana government own the company or, as it is rumored, is it a Nigerian Company? If it is a Nigerian company, how come Noguchi Research Institute that spearheaded COVID-19 tests at the airports, seaports and land boarders when the Pandemic hit did not get the contract to do the work at the KIA?

Eighteen months into the spread of the pandemic and with the delta variant still ravaging most of the world, especially poor-resourced countries in Africa, Asia and Latin America, a lot has been learned about how this pandemic behaves and vaccines have been invented to stem the tide of spreading the virus and causing unnecessary deaths.

Compare the current moments to December 2019 and early 2020, when the former president of the United States, Mr. Donald Trump played it down, and, commented that within a short time the virus would disappear. His mishandling of the pandemic crises definitely lost him an election that he wanted so badly to win.

While scientists were wrangling to find vaccines and therapies to stem the tide of the pandemic, conspiracies theories floated around social media that made wild claims about the origins of the virus. A wild claim that the US government funded the Chinese to develop the virus as a means of controlling world population was among some of the outrageous conspiracy-infested social media. WhatsApp was filled with weird concoctions and therapies.

There were posts that suggested that Bill and Melinda Gates and associates saw the need to wipe out the black race in other to dominate the vast natural resources in Africa to enrich themselves to support the lifestyles of the western nations.

Like most responsible governments that took aggressive steps to lock down economies and mandate mask-wearing and social distancing, the government of Nana Addo Dankwa Akufo Addo did well by imposing lockdowns, closing down the boarders and enforcing mask mandates and social distancing protocols. With this enforcement measures Nana Addo’s administration received commendations from our sub-region.

It is amidst these frightful uncertainties that someone established a company to provide Covid-19 testing for passengers departing and arriving at the Kotoka International Airport to determine whether travelers were positive or negative for the virus. These tests came at considerable costs. It cost $150.00 for non-ECOWAS passengers and $50.00 for ECOWAS passengers. Passengers that tested positive were required to quarantine for 14 days at their own expense.

The focus of this article centers on who owns and operates the Frontiers Healthcare Solution Services Limited, responsible for the COVID-19 pandemic testing at the Ports: Government or a private Nigerian Company?

A few months ago, this topic became the number one issue on social (media) network because the Members of the Vetting Committee in Parliament were asking pertinent questions of some of the people the president had submitted to serve in his second term administration as Ministers of various ministries. Two such persons were Hon. Sarah Adjoa Safo, Gender, Children and Social Protection, and Hon. Kwaku Agyemn-Manu, Health.

During the February 17, 2021 vetting section, Committee Members asked Hon. Agyeman-Manu to comment on how the Frontiers Healthcare Solutions Services Limited was established. He said the contract was granted on an emergency procurement based on the law that procurement and donation shall be undertaken in a natural disaster, epidemic subject to the Public Procurement Board of Directors approval in accordance with contract act 663 Section 40. But, they later revealed that even though the company performed an important function it was discovered that they had no license to operate at the time.

A vetting Member of the Committee also asked Hon. Sarah Adjoa Safo, the then Minister of Procurement as to how the contract of the Healthcare Solution Services Limited came about? She replied by saying, she did not know but that they should ask the Minister of Finance, Hon. Ken Ofori Atta who was at the time on medical trip to the United States. I was a bit perplexed to hear such answer because I thought all governmental contracts go through the procurement minister who then advices the president.

The Vetting committee Members appeared not to have gotten clear answers to their questions. However, in the end, they pushed the names through full parliament vote for confirmation. Moreover, they are currently occupying their new ministerial positions.

We ask for a thorough investigation to bring our minds to rest.

Hottest Photo Reports
Catch up with all the political quotes from our politicians.
Advertise here
More Critics
ModernGhana Links
Response To National Security And Military High Command On Withdrawal Of Military Personnel From Speaker's Office
Speaker Bagbin's Drama Is No Longer Funny -Sir Obama
Absurdity In The Management of SDD-UBIDS
Omicron Variant Awakens the World to Vaccine Inequity, Racist Policies, and the Global Neglect of Africa
Minority MPs In Parliament Disappoints Their Constituents with an Unreasonable Own Goal
E-Levy Doesn't Discriminate
People of Upper East Region enemies of development, reasons why Upper West is ahead
Another episode in Ghanaian faux outrage: The case of the Do-or-die Affair
Corruption Fight: 78% of Ghanaians not confident in Akufo Addo rather than CDD's 62% - Economist claims
TOP STORIES

E-levy consultations: Ofori-Atta is a soft-spoken liar – Ban...
11 minutes ago

Gov’t will build houses for displaced victims of Appiatse ex...
38 minutes ago