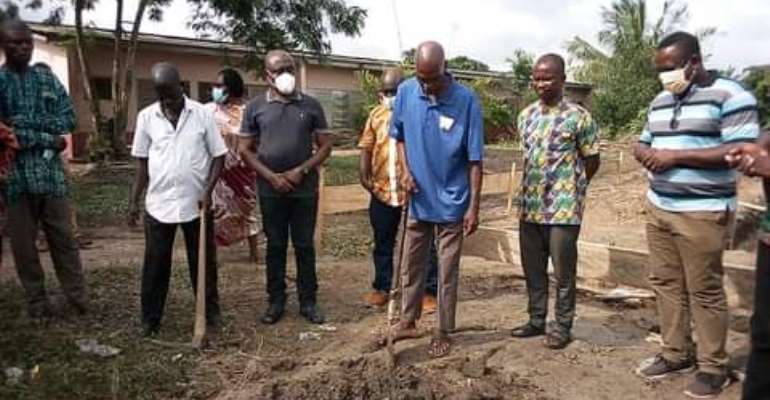 Kyidomhene of Gomoa Nsuem in the Gomoa Central District of the Central Region, Nana Kobina Acquah has asked members of the ruling New Patriotic Party (NPP) to propagate achievements of His Excellency Nana Addo Dankwa Akufo Addo led NPP Government to propel them to win 2024 General Elections if they wished to break the Eight as they sought to convince Ghanaians.

According to Nana Kobina Acquah, NPP was the only party that care for the Well-being of Ghanaians especially people of Gomoa Nsuem community.

Nana Kobina Acquah stated these at a sod-cuting ceremony held at Gomoa Nsuem for construction of a CHPS Zone Compound to offers quick Healthcare delivery to the people in the vicinity at the weekend.

According to the Kyidomhene of Gomoa Nsuem, the NPP was the only party whose governments has introduced people centered projects thus empowering the people economically.

" I can say for a fact that all developmental projects in Gomoa Nsuem came about through Npp-led governments. From Former President John Agyekum Kuffour to His Excellency Nana Addo Dankwa Akufo Addo.

Today, Gomoa Nsuem can boast of modern classroom blocks, extension of water and electricity supply, school feeding programme, a community center and other social amenities and and now a CHPS Zone Compound, we are extremely grateful to the NPP for this kind gesture.

What saddened my Heart is inability of Ministries, government agencies and Party Communicators to propagate this enviable achievements to the masses, thus creating vacuum for the opposition parties to take undue advantage to throw dust into the eyes of the people.

Achievements of the President Akufo Addo led NPP government is second to none and the physical evidence are there for all to see. It is simply unprecedented"

He noted that even though reconstruction was ongoing, he expressed concern over the snail-paced manner the contractor was executing the project and called him to expedite action for its early completion.

" Gomoa Nsuem is a farming community which produces cash crops for export. A lot of investors wish to come and invest here but the deprived nature of the road is driving them away. If completed, it will reduce unemployment and boost the local economy"

The Member of Parliament for Gomoa Central, Hon. Naana Eyiah addressing the people said construction of the CHPS Zone Compound had become necessary to give the people Healthcare delivery before referring patients to bigger facilities when the need arises in special cases.

The MP who doubles as the Deputy Minister for Interior lauded the people in the Gomoa Nsuem community for their unflinching support for His Excellency Nana Addo Dankwa Akufo Addo led NPP Government adding saying they will also continue to have their fair share of the National Cake.

" Per your massive support for the NPP government, we will ensure that every social amenities needed to improve the lives of the people would be provided accordingly.

Gomoa Nsuem has been supportive of the NPP programmes and policies. We recognizes this and we will reciprocate this gesture to get all developmental projects for the community.

On the poor road network, Hon. Naana Eyiah assured that it would be done within the record time to enhance smooth transportation of goods and services and to attract more investors.

Gomoa Central District Chief Executive, Hon. Benjamin Kojo Otoo said the Assembly was going to offer the needed support for the constructor to finish the project on time adding that Works Department of the Assembly has been tasked to carried out intensive monitoring and supervision of the project to ensure its early completion.

He encouraged Nananom to also monitor progress of work done at various stages and to prompt the constructor if he goes against design for the project.

" This CHIPS Zone Compound belongs to Gomoa Nsuem community, you should therefore own it as a community property. Kindly watch progress of work with eagle eyes but without antagonism to the constructor and his workforce"

The Chief Executive Officer (CEO) of Man of Peace and Sons Company Limited, Alhaj Omar Adam who would execute the project assured its early completion and on time.