The pain of a teenage 'Kayayo' at night 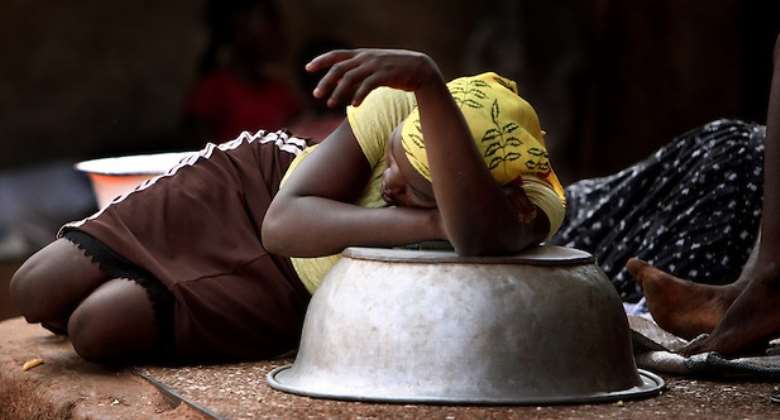 In the field of child development, internal migration particularly rural-urban areas like; Ashaiman, Zenu, Kpone has generally been regarded with considerable pessimism. Starting in the late 1950s-to date rural-urban migration attracted substantial attention from both academia, government and policy makers. Much of this attention were discarded, it’s never yield any fruit.

Streetism connotes with negative alarmist and contributed to perceptions of migrants from rural areas flooding into the major cities putting stress on urban services and infrastructure.

This view was further bolstered by the argument that migration has affected the economy of its more skilled and innovative individuals, thus stunting the progress of the growth and poverty reduction that was expected to be achieved.

The challenging part of streetism is the flooding of young girls between the ages of 8-15 on the major cities of Ashaiman.

Walking down the streets of Ashaiman, Zenue, Kpone, one will be shocked at the number of young girls posing as street hawkers and beggars. Some are posed as Kayayo during daybreak. Most of these children mostly migrate from the Northern part of Ghana. What is more shocking is the very deplorable state that these girls live as well as their day-to-day ordeals. These children are mostly found sleeping on Tables, Verandas, Shed erected by them or permitted to stay by the owners of the shops.

A more disturbing fact is that, a number of the boys are engaged in social vices like; stealing, smoking and among others. The females are raped each day because of the nature of the dwelling places. Imagine a child of about 10 years sleeping on the shores of Russia (a town in Ashaiman)? She can be raped because of the young boys into drugs. Some children seek refuge from security men at night; others form alliance with male counterparts for protection who have sole right to have sex with them.

Kayayo is popular among the Northern girl to the extent that it is becoming a profession. It is not new to the Ghanaian populace yet little has been done to refute this canker. What beats the mind of people is” why these young girls leave their native homes to do these bizarre jobs in unfavorable conditions?”

An interaction with Amina Ramatu a 12-year-old child who is into Kayayo. She explained that there is money in the business as it fetches one with a daily income without depending on people for survival. According to the young child, she left her home in the North due to the brutal abuse of her Stepmother. To save her life, she joined few friends who were coming to Accra for a job. The drive to search for alternative sources of livelihood makes most of these young girls migrate south to engage in Kayayo. While some decide to go on their own accord, other are forced to move by their parents as they see a neighbor’s daughter come back at Christmas with goodies or items.

Hitherto, most parents in a bid to look for alternatives means of livelihood for themselves and their teenage girls turn to give their children out for early marriage at a tender age. With society frowning on this teenage marriage practice, the trend has gradually shifted to forcing these teenage girls in Kayayo and sex workers. It is evident that some of these girls run from homes because they had betrothed and given off early into marriage.

While others blame the cause of this great trek on Families, others dwell on the poverty levels of the people in the Northern part of Ghana; Upper West, Upper East and North. It is a generally upheld view that the three northern regions have some of the most deprived and poverty-stricken areas in Ghana. This lead to the migration of the youth to look for alternative opportunities to make life. Due to the undesirable poverty levels, some youngsters after completing JHS and SHS migrate to Accra in a bid to work and finance their education. Majority of the people end up being Kayayo, Sex workers in and around Zenue, Ashaiman, Russia and others.

In Ghana, rising female migration from rural communities in the north of the country has been viewed in a largely negative light and the policy response has been to discourage women in these communities from migrating.

However, can this one alone be the only panacea to discouraging the existence of Kayayo in our major cities? A lot depends on the governmental institutions and civil society groups to chart a new path.

The Northern part of Ghana needs to be given a new face to lift in order to create more jobs, for not only young girls but their male counterparts as well. Bridging the North-South gap in terms of development should be primus emptor pares.

The Savannah Accelerated Development Authority (SADA) is a bold step being taken by the government of Ghana to bridge this gap.

Further, agriculture the main means of sustenance in the North needs to be improved. Research has during the lean season. Irrigation agriculture should be a prime focus of Government in order to ensure all year cultivation. This is in essence go a long way to increase agricultural productivity as well as curb the seasonal unemployment both of which are push factors of teenage migration in the North.

Besides there are countless NGOs in the Northern part of Ghana. The Capital city of North Tamale has been dubbed the NGO hub. Is it that the NGOs are not working or they are not locating the main issue in the Community? What about the aspects of women empowerment, which is a core, line in their mission and vision statement of their NGO? It is a high time effort are channeled towards addressing this menace in the Community.

This involves Government, all NGO, Civil groups, Traditional leaders to halt this canker-eating deep into the fabric of our country.

Alternative job opportunities for livelihood creation should be the central focus of the government and NGOs either than the resilience farming. More jobs can be created in the North that will engage the services of the youth. A school of thought is pf the opinion that dormitories should be built in the cities as homes for the Kayayo. This will ultimately lead to the increase of Kayayo and migration. Governments, NGOs, Policy makers should channel their effort to addressing the socio-economic push rather than proposing measures that will fuel Kayayo.

In Ghana, the migration of women from the north of the country to engage in Kayayo particular is seen in a negative light not only by the general populace, but also by government officials and by non-governmental organizations.

Latest Photo Reports
Catch up with all the political quotes from our politicians.
Advertise here
More Editorial
ModernGhana Links
What is the E-Levy?
The Noise Pandemic Will End If We Enforce Laws
The COVID impunity persists
The Mounted Novelty Is Here
Editorial: Considering the SME lending gap in West Africa
For The Sake Of Road Safety
Our rivers are back
And There Was No Scandal
Kwaku Agyeman-Manu’s loyalty to the grave worth emulating?
TOP STORIES