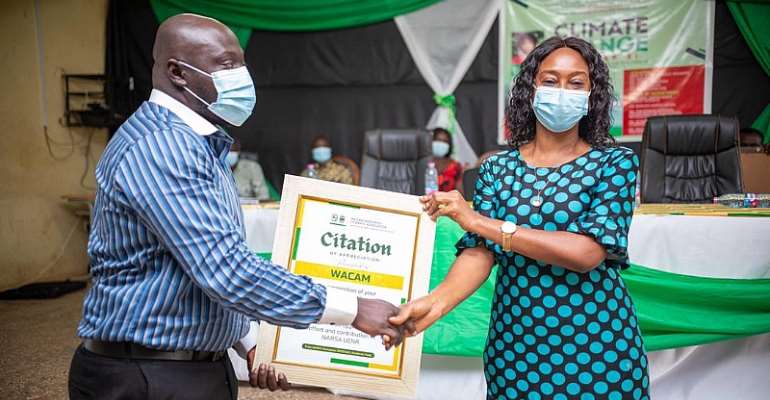 Wacam, a community-based human rights and environmental mining advocacy, has charged students of the University of Energy and Natural Resources (UNER) in Sunyani in the Bono Region to be environmental stewards.

According to the mining advocacy NGO, the importance of their participation in the protection and sustainable management of the country’s environment cannot be overemphasised.

The Technical Director of Wacam, Kwaku Afari, made the call when he recently gave a presentation on: “Natural Resources Contribution in Climate Change Mitigation: The Role of Wacam” at the UNER in Sunyani in the Bono Region.

The one-day 2021 Climate Change seminar, organised by the UNER, in collaboration with the Centre for Climate Change and Gender Services, brought together academia, environmentalists and students.

It was aimed at how contributions from the country’s natural resources can help reduce the seriousness of climate change.

Mr Afari admonished the students to see Ghana as an important country rich for its biodiversity conservation because Ghana boasts of rich forest reserves.

However, he expressed the view that not enough was being done to protect or promote sustainable management of the environment.

“Sadly, I believe that we have spent too much time digging it up and cutting it down and far too little time in seeing its tremendous value as is and intact and learning to live, utilise and enjoy it in a sustainable manner.”

Also, with the threat posed by mining to food security, he advocated what he termed as ‘Land for Land Schemes’ to be incorporated into the Minerals and Mining Act 2006 (Act 703).

Such a move, he said, will support farmers, especially those who lose their lands to mining operations, to acquire same land elsewhere for farming.

And while calling for the regulatory framework (Minerals and Mining Act) to address land matters affected by mining, Mr Afari, who is also a lawyer, stressed the need for the provision of stringent regulations for the reclamation of destroyed lands by mining companies.

Even though the country’s mineral resources have attracted significant investment over the last 20 years, he said mining has become a “developmental controversy.”

By developmental controversy, he explained that “while acknowledging its [mining’s] financial contribution to the growth of the economy, it is associated with pollution of water bodies, soil, air as well as environmental degradation leading to deteriorating water quality, livelihood losses and its resultant upsurge in mining related diseases among residents of mining communities.”

Again, the technical director of Wacam said implementation of the 2015 Paris Agreement, which enjoins countries to limit global warming to below 2.0°C and not above 1.5°C preindustrial level, will also assist in fighting climate change in the country.

He said when this is aggressively pursued by the powers-that-be, it will help in decarbonisation across industries, hence creating major shifts in commodity demand for the mining space.

Mr Afari lamented that the pollution of water bodies by mining companies in the country have had adverse effects on lives in those areas.

“The competing needs of the mining industry and host communities of these water resources bring to bear the need for sustainable use of our water resources for agricultural productivity and human security,” he noted.

Mining communities, he said, depend largely on water bodies for food and agricultural purposes.

Against the backdrop of the above, Mr Afari said Wacam’s activities have focused mainly on responding to the social, environmental and economic problems that had resulted from increased mining investment of the third gold rush.

“Our work is focused on community mobilisation, organisation and rights-based education for empowerment, at the local, national, sub-regional and international levels to influence practices changes,” he pointed out.

Furthermore, he said his outfit’s works in natural resource governance have led to various interventions.

This, he said, have included the use of research and documentation for advocacy.

He mentioned topics including assessing the social and economic effects of mining on women affected by Newmont Ghana Gold Limited’s operations, exploring local content potential for participation in gold and oil and gas exploitation in Ghana, and onshore petroleum exploration in Ghana, a study on community rights, as some of the areas Wacam has researched into.

On interventions, Mr Afari recounted that in 2011, through Wacam’s advocacy, a whopping sum of GH₵7 million fine was imposed on Newmont for cyanide spill in Kenyasi.

That, he recalled, was made possible through Wacam’s activists at both national and in Kenyasi who documented evidence and submitted it to the Committee of Enquiries set up by the Ministry of Environment to investigate the spillage at the time.

Also through Wacam’s activities in 2020, some 23 households of Dormaa Kantinka were resettled, he stated.

For its support to students in the natural resource space, Wacam was presented with a citation.