The Son Of Man And The Concept Of The Abode 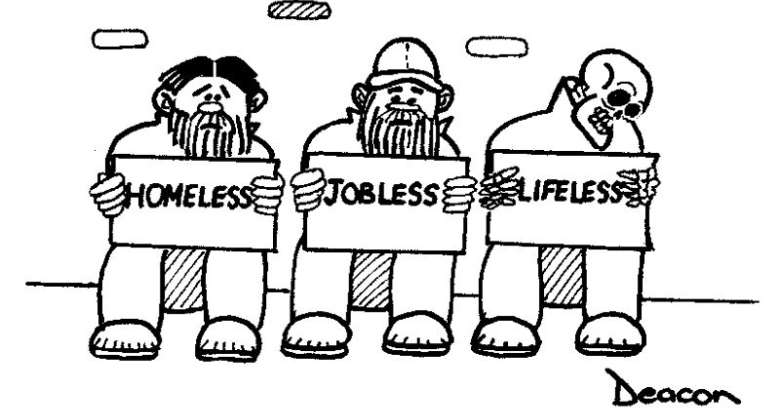 It was around 0 BCE, when Jesus uttered these words—meaning of which are not precisely lost on many of us. It is a concept many of us, having experienced our own fair share of hardships, are already familiar with: “Foxes have dens and birds have nests, but the Son of Man has no place to lay his head.” The Son of Man being of nature a poet, was by stating this basically saying, ‘I am homeless—and it sucks!’ That resonates better, does it not? Homelessness—or ‘on the brink of homelessness’ is a concept many a Ghanaian have flirted with. It is a concept many citizens of the developing world—and funnily enough, the developed world even, are familiar with.

Let me back up a little: it was around… (let’s be frank, I don’t know precisely when and where this event I’m about to relate happened) when a King gathered his elders around Him, and laid the matter at hand before them. A territory under His reign—one which He Himself had deigned create, was in a mess. It was muddied in sin. For lack of knowledge, it was muddied in sin. Knowing not who their landlord was, these tenants were doing whatever it was they fancied. This muddied place was earth. Solutions had to be proffered. The solution was this: a sinless soul had to be deployed to the earth, to show the people the way. That person was to ultimately die for the sins of these ‘earthers’—a gesture so profound that it was bound to be ingrained in the minds of the people for all eternity.

But who was to give themselves as this living sacrifice? You should have been there to see how the elders fidgeted in their seats upon hearing this ‘solution’. You should have been there to hear that deafening silence that ensued. The Son of God did them all a favour by breaking the silence—He was to be the one to go on this mission tasked by His Father. It must have been tough for the Father to watch His only Son condemn Himself to impending death. It was so gruesome an experience that the Father was to repeat this same scenario upon a certain human being—Abraham, years later. But that is a story for another day.

So, the Son of God turned Son of Man, found Himself in a virgin’s womb, and years later, a grown man on—I daresay—a capitalist soil. It was then—after having experienced the harrowing experience of living that he uttered those words, “Foxes have dens and birds have nests, but the Son of Man has no place to lay his head.” A place to place one’s head is not vanity, it is a necessity that even the Son of God, having become a Son of Man, Himself sought. So, can we proceed without these words hovering around us?—"Man shall not live by bread alone.”

This piece is actually a continuation of ‘#Stay Home. #Stay Where?’ Yet, I cringe at the idea of numbering a piece of mine ‘Part Three’. ’Because having suffered at the hands of Ghallywood, Kumawood, and Nollywood in the past (and I know you have too), I desist from such long lists of sequels. So, ‘#Stay Home. #Stay Where? Part One, Two, and Threeee’ will not happen. I am going to rename this piece—just for the sake of it.

Regardless of how we choose to put it, the housing issues our nation, being a developing one, is confronted with, remains same in its severity and consequent effects. Because when constantly burdened with a necessity as basic as where to place one’s head, one is likely to function poorly in this capitalist society—just as the Son of God found His duties almost too hard to perform because “foxes have dens and birds have nests, but the Son of Man has no place to lay his head.”

Last two weeks, in ‘#Stay Home. #Stay Where?’, we showed how this modern era, being of nature a capitalist one, an industrial one, a digital era, dictates that the agglomeration effect take place in cities not villages. We showed the journey traversed by humankind spread about in various societies across the globe—with the spotlight on early Europe. We showed how humans have moved from an agrarian economy, one which benefits largely on spatial living to a highly industrialised, information technological age, one which by nature flourishes on agglomeration. And looking at the peculiar characteristics of land masses from which cities are couched, it only makes sense that cities be the hub of this industrialised, information technology age. We concluded then, that the strive by the citizenry to move to cities to have their share of this modern era—this industrial and technological era should be encouraged and applauded even. If Ghana is to render itself competitive in this highly globalised era, that is.

Last week in ‘#Stay Home. #Stay Where (2)’ we took a look at the effects these moves—these rural-urban moves, can have on nations. These migrations, supposed to yield positive effects, may easily spawn negative consequences when managed poorly. It takes great, great leadership to transform these national phenomena, as shared as they are with other nations, into national treasures.

What urbanisation has yielded for a developing country such as ours, and particularly for the housing sector, is an increase in slums, squatters, hardships, and rampant homelessness. We looked at the many ways our nation has sought to address these housing problems. And they have consisted, over the many years, of legal and regulatory reforms, many of which have failed at yielding their intended purposes. In this new series, we take a look at certain new reforms—proposed and passed into effect—intended to try their turn on solving the nation’s housing deficit. We will also look at one of the vital ways our country is failing—and that is public housing.

We await earnestly, the advantageous effects intended by these new reforms, because the picture prevailing for much of the citizenries is not a good one.

Let me Draw You a Picture

You would have to master the kpa kpa kpa movement if you are to navigate the housing problem in the country as an average citizen. Because you see, you can’t have it both ways—you would have to choose between rent and transport if you are to make it in this game. And the agglomeration effect is of a nature that, majority of businesses, companies, organisations, etc., find themselves located around the same vicinities—making these vicinities the hotspots, the el dorados. They are the ideal housing locations for the average working citizen. Finding apartments at these areas is not a luxurious act; it is a necessity. It is prudent because the alternative can easily have unintended consequences. Apartments in these hotspots, in the claws of the laws of demand and supply, are unsurprisingly high. Hence, the same people who need to stay closer to their workplaces so as to cut down transportation costs, find themselves with no option but to find apartments in the ‘outskirts’. So, you find yourself staying in the Greater Accra Region but living in the Central Region—Kasoa.

Please don’t look around for ‘continued on page such-and-such’ because there is none. Not today. Let’s continue this next week when we will attempt drawing a better picture.

Just so that one’s answer to the inquiry ‘who is Yao Afra Yao?’ will not be ‘the person who writes those long articles in the B&FT” we have subverted expectations today by keeping it short. Or if we be frank, it is because I am just tired—talking about the housing problem really stresses me out. So, say it with me: ‘The Son Of Man And The Concept Of The Abode Part One Two, And Threee!’. Yes, this installment is definitely going to get a part two and three.