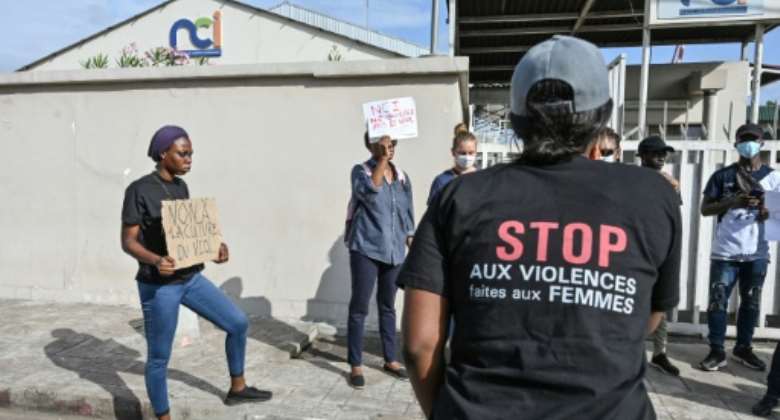 Feminists in Ivory Coast on Thursday hailed a rare victory after a TV host was handed a suspended sentence over a prime-time show during which he was accused of making light of rape.

On the show, the celebrity host laughed as he handed a mannequin to his guest, Kader Traore, described as a former rapist.

De M'Bella helped Traore to lay the dummy on the floor and asked him to explain in detail how he raped his victims.

Convicted of "condoning rape" and "indecency", De M'Bella was slapped with a 12-month suspended sentence and ordered to pay a fine of two million CFA francs (3,000 euros, $3,600).

He was also told not to leave Abidjan, the West African country's economic hub.

The Ivorian audiovisual authority HACA suspended De M'Bella for 30 days from all radio and television stations.

And he has been barred from hosting the Miss Ivory Coast beauty pageant, set for Saturday.

For his part, Traore, who already had a record for sexual violence and assault, was sentenced to two years in jail and fined 500,000 CFA francs.

The head of an association of rape victims, Benedicte Joan, praised the court for its speedy action but regretted that De M'Bella "won't go to jail" and criticised the amount of the fine.

She said De M'Bella should also be ordered to pay compensation to women's rights groups and rape victims' associations such as hers.

Desiree Deneo, secretary general of the Ivorian Women's Rights League (LIDF), said: "For once, there's a pretty strong reaction by public opinion and the justice system."

She added: "You see a strong signal... It helps raise awareness."

The high-profile controversy and court conviction helped to "open up the debate on rape in Ivorian society (and) helped these women (victims) feel less alone and more willing to break their silence."

Since Monday, she said, the LIDF had been flooded with testimonies from rape victims.

But like Joan, Deneo said the sanctions were not enough.

The LIDF, which provides psychological and legal aid to the victims of sexual violence, says an average of five sexual assaults and two rapes are committed against women in Ivory Coast each day.

Deneo called on Ivory Coast's doctors federation and its health ministry to make certification of rape free for the victims, who currently must pay 50,000 CFA francs to obtain one.

Jacqueline Seuyanou Gueu of Kwaan'na, a non-profit that helps women victims in the west of the country, also hailed De M'Bella's conviction.

"It's a big step forward, because it's not just anyone," she said. "But it's not enough because he didn't act alone."

She said the NCI channel "should also be punished because there is a whole team behind this broadcast."

The channel has apologised for the show, but has not faced legal proceedings. HACA simply asked it to show "vigilance" over its programming.

De M'Bella is paying "the price for collective wrongdoing", wrote the daily Le Reveil, which is close to Ivory Coast's main opposition party.