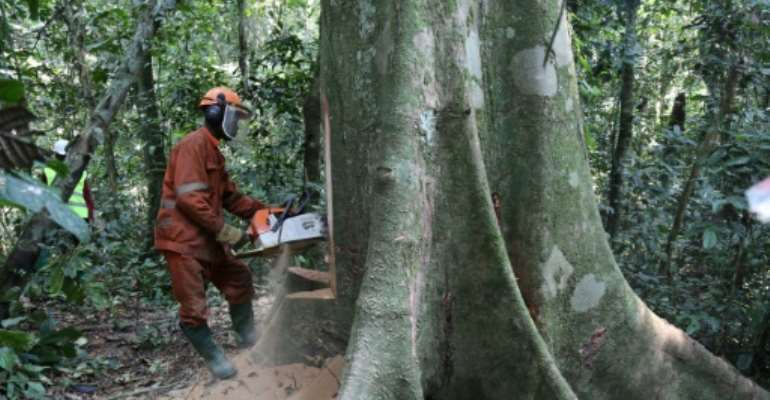 Environmental groups on Thursday warned of an impending "biodiversity catastrophe" if DR Congo pushes ahead with a plan to scrap a moratorium on new logging permits.

"The Democratic Republic of Congo harbours the world's second-largestâ€¯rainforest after Brazil," Greenpeace, Rainforest Foundation UK and others said in a statement.

"It is home to 40 million people, a carbon store and a biodiversity reserve of global significance."

The environment ministry announced a proposal in July to lift a 19-year-old ban on new industrial logging, touching on a resource that is both financially lucrative and a natural treasure.

"Should the moratorium be lifted as planned... the area of DRC's rainforest handed out to timber companies could increase by 20 million hectares (49.4 million acres) -- an area the size of Britain," the green groups said.

"However, potentially as much as 60-70 million hectares of intact forest, home to thousands of local and indigenous communities and endangered species such as the lowland and mountain gorillas, forest elephants and the endemic okapi, are under threat."

They said they had spelt out the warning in a letter to donors funding schemes t protect forests and other natural buffers against climate change.

Rainforest Foundation UK said it calculated that more than a million hectares of forests growing on peat swamps could be handed over to loggers.

The swamps comprise huge stores of carbon from trees and vegetation that have lived and died over many millions of years.

If disturbed by logging, the area could release over 10 billion tonnes of carbon into the atmosphere, worsening global warming -- equivalent to nearly 200 years of Norway's annual national carbon emissions, the NGO said.