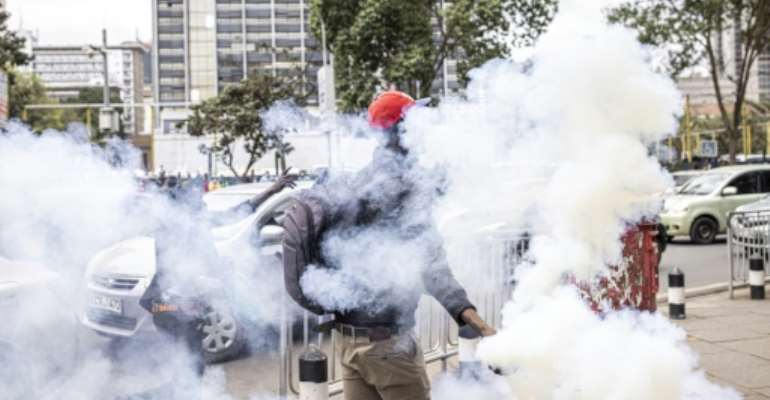 Kenyans have taken to the streets to protest alleged police brutality. By Patrick Meinhardt (AFP/File)

Six Kenyan police officers were charged on Thursday with murder over the deaths in custody of two brothers arrested for allegedly breaking a Covid curfew.

The six officers -- two of them women -- denied the charges at a hearing in Nairobi and were ordered to be kept in custody until a bail hearing on September 22.

The brothers were last seen alive on August 1 when they were picked up by police for allegedly being outdoors beyond the nationwide 10 pm curfew.

Their bodies were discovered two days later by family members at the local morgue in Embu County in central Kenya, according to rights groups.

Police said the pair jumped from a moving vehicle -- a claim rejected outright by activists.

The defence had earlier requested an exhumation of the bodies for a fresh post-mortem but this was denied by the court.

Their deaths sparked demonstrations in Embu in early August, with people torching a police vehicle and blocking roads with burning tyres. At least one person was killed when officers opened fire to break up the protests.

Rights groups have condemned what they describe as a "twin pandemic" of Kenyan police violence that has accompanied the nationwide Covid curfew since its enforcement began in March 2020.

"We sadly note that this is not the first death arising out of police enforcement of Covid-19 measures," the Police Reforms Working Group, a coalition of civil society groups, said last month.

Activists have reported 25 cases of extrajudicial killings linked to Covid measures, said the statement signed by Amnesty International and Transparency International, among other groups.

In mid-August, police said they were investigating a case involving a 38-year-old motorcycle taxi driver who was allegedly beaten to death by police for violating the curfew.

The discovery of his body in the eastern Nairobi district of Kayole also set off violent protests, with roads blockaded by fires and mobs of youths looting shops.

Kenya, with a population of some 48 million, has registered nearly 237,000 Covid cases and more than 4,700 deaths since the start of the pandemic.