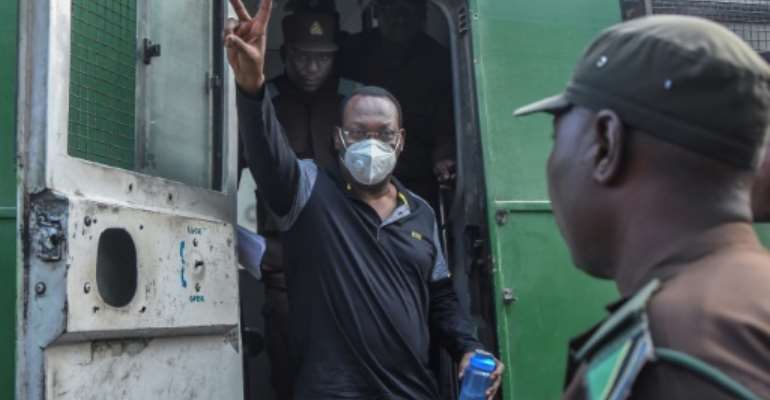 The opposition Chadema party says the case against Mbowe is an attempt to stifle dissent. By STRINGER (AFP)

The terrorism case against the leader of Tanzania's main opposition party can go ahead as planned, a high court judge in Dar es Salaam said Wednesday, dismissing objections by his party.

Chadema party chairman Freeman Mbowe and his supporters have described the charges as a politically-motivated effort to crush dissent, and accused police of torturing him in custody.

His lawyers had argued that the high court's Corruption and Economic Crimes Division where he appeared had no powers to hear the case, which was previously being handled by a magistrate's court.

But on Wednesday judge Elinaza Luvanda said that "this court has the jurisdiction to hear terrorism cases and therefore I don't agree with the objection made by defendants."

The hearing took place under tight security, with some representatives from foreign embassies and Chadema's senior leaders in attendance, but many journalists were banned from entering the courtroom by police.

Mbowe has been behind bars since July 21 when he was arrested along with a number of other senior Chadema officials in a night-time police raid hours before they were to hold a public forum to demand constitutional reform.

The 59-year-old has been charged with terrorism financing and conspiracy in a case that has sparked concerns about democracy and the rule of law under President Samia Suluhu Hassan.

On Monday, Mbowe had appeared in court to pursue a case against top legal officials, claiming his constitutional rights had been violated during his arrest and when he was charged.

Samia Suluhu Hassan, second right, took over from hardliner John Magufuli, who died in circumstances that remain unclear. By - (AFP)

His defence team says he was held without charge for five days and then charged without his lawyer being present.

The opposition has denounced the arrests as a throwback to the oppressive rule of Tanzania's late leader John Magufuli who died suddenly in March.

There had been hope Hassan would bring about a new era of democracy after the increasingly autocratic rule of Magufuli, nicknamed the "Bulldozer" for his uncompromising style.

But Chadema leaders say the arrests reflect a deepening slide into "dictatorship".

Prosecutors say the allegations against Mbowe do not relate to the constitutional reform conference Chadema had planned to hold in the port city of Mwanza in July, but to alleged offences last year in another part of Tanzania.

Chadema has said prosecutors accuse Mbowe of conspiring to attack a public official, and of giving 600,000 Tanzanian shillings ($260/220 euros) towards blowing up petrol stations and public gatherings and cutting down trees to block roads.