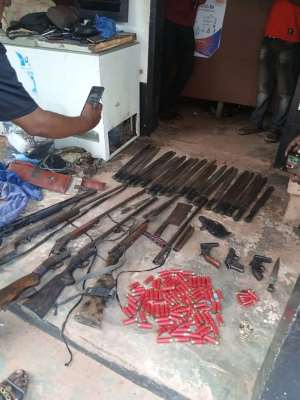 The Police in Donkokrom, the District capital of Afram Plains North in the Eastern Region have arrested 23 Fulani herdsmen who are reported to be terrorizing residents in the area.

The suspects currently in Police custody were picked up in a swoop by the Anti Robbery operation team at Donkorkrom led by DSP Lovelace Kofi Glago in a joint exercise with personnel from the Donkorkrom Division.

The Eastern Regional Police spokesman, DSP Ebenezer Tetteh who confirmed the incident said the suspects were grabbed upon a tip-off intercepted that they were on board a Toyota Tacoma pick -up registered AW 983-20, Ford Pick Up No. GE 7066-11, motor tricycle No M-21-EN 635, at Donkorkrom township in front of Glory Oil Filling station.

However, a search was conducted on them, and the weapons were found in the pick-up vehicle.

The Police also conducted search in the rooms of the suspects, Iddrisa Sambo and Issaka Ali at Donkorkrom – Zongo and at one of the rooms of Idrissa Sambo, where 12 BB cartridges were found.

He said the suspects are currently in Police custody assisting in investigations.