Passports and jobs to be denied for 'trouble makers' in Kashmir 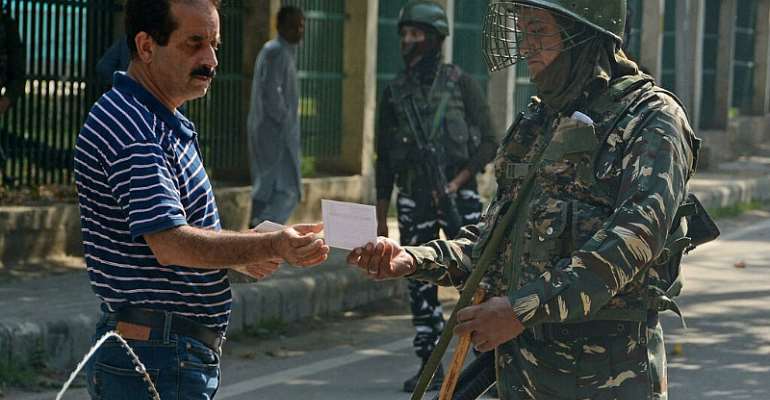 Earlier this month, the Jammu and Kashmir administration decided to stop security clearance for Kashmiri youth allegedly involved in stone pelting and so-called 'anti-national' activities. There are concerns this will make it virtually impossible for them to find jobs or obtain passports.

All field officers have been asked to “specifically look into” the involvement of the individual in law and order disturbance, stone pelting and crimes that are considered a threat to the security of the union territory.

The restive region of Jammu and Kashmir has been ensnared in turmoil for decades.

In August 2019, thousands of protesters were arrested and the internet was shut down in Muslim-majority Kashmir, claimed by both India and Pakistan, after India stripped its portion of the region of its autonomy and statehood.

It was also divided into two federally controlled territories: Ladakh, and Jammu and Kashmir.

The central Indian government insists that the measures were needed to curb terrorism and boost economic development in the region.

Alienation
But many Kashmiris saw the move as a disenfranchisement campaign by Prime Minister Narendra Modi's Hindu nationalist government.

“Such arbitrary decisions of stopping passports and denying jobs will only push youth into further alienation and prove counterproductive for the peace and reconciliation process,” said local politician Altaf Bukhari.

“An adverse police report can't be a substitute for being found guilty in a court of law,” said former chief minister Omar Abdullah.

“A year-and-a-half back, the police were able to create an adverse police report to justify my detention under Public Safety Act that would never have stood up to legal challenge”.

Move ahead of elections
Given that government is trying to revive political activity in the lead up to elections, some feel that such a far-reaching measure would dampen the hopes and aspirations of thousands of people.

“Most youth in Kashmir have participated in some demonstration or the other. This move could hurt the aspirations of thousands of people when jobs are so scarce,” Fayaz Akbar, a student told RFI.

The army, however, feels that the new modus operandi to indoctrinate and train Kashmiri youth in militancy was to call them through proper visa channels, rather than having them take the risk of crossing the border illegally.

An army spokesperson cited the instance of at least 40 Kashmiri youths who travelled on visas to Pakistan for studying purposes after being given proper certificates for visa, but they were sent back as terrorists.

“This directive is to doubly ensure that individuals with dubious character antecedents and conduct are not employed by the government without the mandatory verification,” a senior bureaucrat told RFI.

Accountability
“It is a great step and will serve as a severe blow to those conspiring against the country and fleeing abroad to escape accountability,” said the right wing Hindu nationalist BJP unit chief Ravinder Raina.

In case of receipt of an adverse report, which will further be confirmed by a screening committee, the appointment to a government job will be withdrawn or terminated.

Economic development and improved security in Jammu and Kashmir were touted by Modi's Bharatiya Janata Party as the objective behind scrapping autonomy in the state.

However, two years later, many feel development has been minimal, although the level of violence in India-administered Kashmir seems to have decreased in this period.