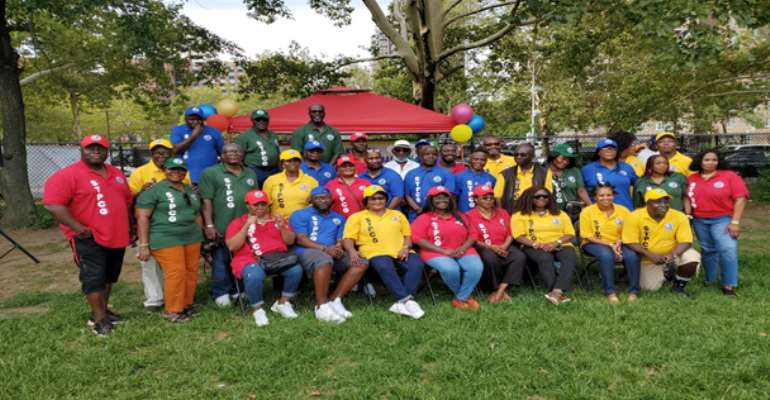 The Sekondi-Takoradi Progressive Club Global has been inaugurated on Saturday, August 21, 2021 under the theme “Progress and Development for the People” in the USA.

In her opening remarks, Ms. Caroline Ewurabena Ampah, the Founder and President of the Club said the inauguration of every club emphasizes the responsibilities and commitments demanded from members and leaders alike.

She gave an overview of the Club’s accomplishments in the space of two years, which has positively impacted the lives of the people of Sekondi-Takoradi.

She ended by laying down the vision of the Club for the foreseeable future.

The highlight of the day was the swearing-in of both the President and Executives by Patrons Dr. Samuel Kojo Andoh and Dr. Jojo Quayson, respectively.

In a very fashionable manner, there was proclamation of the Club by Patron, Mr. Kirk Vandyck.

The chair of the event, Dr. Kwame Aniapam Boafo, a Gynecologist in New York applauded the Club and its leadership for their impressive achievements to improve healthcare in Sekondi-Takoradi.

Members who traveled from far away and even across different time zones to attend were pleased that it was all worth the travel.

Satisfied and invited members of STPCG ended a historically successful celebration in peace and extreme joy. This joy was shared with all members around the world (Canada, UK, Europe, Ireland, and Africa) through live streaming of the event on Facebook.

The Sekondi-Takoradi Progressive Club Global (STPCG) is a World-wide Non-Profit Organization, Headquartered, and officially registered and recognized in the United States. Its members are from the US, UK, Europe, Africa and Canada. In 2019, a small molecule of an idea (to improve Sekondi-Takoradi) grew into a world-wide outreach, which became known as the SEKONDI-TAKORADI PROGRESSIVE CLUB GLOBAL.

The main aim is the development and progress of the Twin-City. Gradually, the norms and objectives attracted the most progress-loving and patriotic citizens of Sekondi-Takoradi around the world to come together to help in this endeavor. The love has been evident in our incredible achievements as a Club, within a short space of two-years.

The fact that our name and accomplishments have filled the FM airwaves of the area shows the impact we have made in the lives of our people. Our good work is summarized as follows:

It may interest you to know that our Organization adopted the Sekondi Health Center, Female and Male Wards of the Takoradi Hospital.

The top leadership of the Club is composed of the Executive Council in charge of the administration and management of the Club. We also have a 15-Member Patron Council namely:

They play the advisory role in the Club.

Hottest Photo Reports
Catch up with all the political quotes from our politicians.
Advertise here
More Diaspora (USA)
ModernGhana Links
Ohemaa Mercy to be Honored at the Special 10th Edition of 3G Awards 2021 in USA
Kofi Adoma Nwanwani Receives Another Honors @ 3G Awards 2021 in USA
Minister of Sanitation and Water Resources to be Honored in USA
Kaakyire Kwame Appiah to be Honored @ Special 10th Edition of 3GAwards in USA
First Deputy Speaker of Ghana's Parliament to be Honored in USA
Dan Kwaku Yeboah to be Honored Again in USA
GaDangmes Celebrate Homowo 2021 in Atlanta Georgia
Celebration of a Richly Lived Life – Final Funerary Rites for the Late Opanyin (Elder) Yaw Asiedu-Sarkodie, Aged 87
Mayor of Jersey City, USA, donates PPEs on behalf of his city to Gomoa West District of Ghana
TOP STORIES

No machinations will break ordained Alan as NPP choice for 2...
56 minutes ago