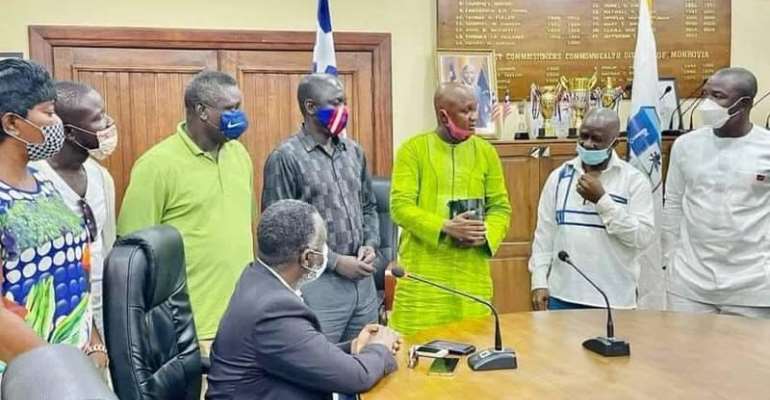 The President of the Republic of Liberia, H.E. Dr. George Manneh Weah, has stepped up in a big way to lend a hand to the dozens of people and families who got victimized by recent fire outbreak in Waterside and assist them with rebuilding their lives.

The Office of the President represented by Hon. Nathaniel F. McGill, Minister of State for Presidential Affairs, today presented the sum of one hundred thousand United States Dollars (US$100,000.00) to Monrovia City Mayor Jefferson T. Koijee who in return presented to the leadership of the Waterside fire victims.

Speaking in a press conference held at the Monrovia City Hall on Friday afternoon, Mayor Koijee appreciated the Chief Executive for living up to his commitment. He further thanked Minister McGill for representing President Weah remarking “we want to say thank you so much Mr. Minister for ably representing our president”.

During his presentation, the City Mayor encouraged the leadership of the fire victims to utilize the money for its intended purpose and cautioned Aminata and Sons Incorporated to do the honorable thing to avoid public misconception and disappointment. “We understand that Aminata and Sons has decided to reach out. We will allow them to come forth”, Mayor Koijee emphasized.

“What occurred in Waterside was extremely catastrophic. The people were seriously affected. As the people begin to pick up their broken pieces, Aminata and Sons should also do the honorable thing. We do not want the public to be disappointed in the way Aminata and Sons will conduct itself in this situation”, he added.

Mayor Koijee used the time to call on patriotic citizens who can afford including NGOs, civil society organizations, international partners to consider reaching out to the victims.

Mohammed Majah Barry, President of the Fula Business Association, who received the cash on behalf of the leadership, thanked President Weah for the kind gesture. He said it is first of its kind for the country’s Head of State to fulfill a personal commitment through cash, something he termed unprecedented.