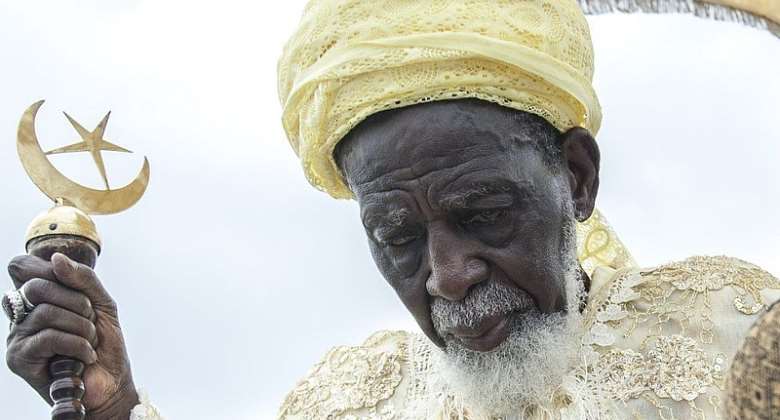 I write this letter to your office as a practicing Muslim Youth who was born into the religion and has subsequently taken the pain to learn about it. I am not an authority in the religion, but at least with the few I’ve learnt and read coupled with the application of common sense, I should be able to tell when a decision is right or wrong.

Many are those who have come after your person and your office for your decision to donate to the National Cathedral project. Most of the Muslims and Muslim groups cite religious reasons in condemnation of your decision. Some did and still do so on political grounds, and in all cases, I can’t fault any of them. We all have our orientations and different ways of thinking and doing things.

I am calling out the said decision not because of my religious orientations or beliefs neither am I condemning same because of my political persuasions, but I am doing so purely on common sense and as one of those who oppose the National Cathedral project.

We are all aware that there is a huge opposition to the cathedral project. The President is bent on executing it amidst this opposition and after several years of pulling down state installations including newly built judges apartments in order to create the needed space to build the cathedral at a prime area like Ridge, Accra. Although the inconsistencies and double-tongues of the government and its assigns abound, they still insist on going forward with the personal pledge made by the President.

Most of the people who oppose this decision by government to build the cathedral do not wear religious, ethnic or political colors, but they come as concerned, patriotic citizens who propose the alternative use of our resources as we tackle National development. There are people who support the NPP yet against the project. There are some who are staunch, practicing Christians yet are vehemently against the project. There are some Muslims, like Dr Bawunia who supports the project, while other Muslims stand against the decision to build the cathedral. All of these people have varied reasons why they either support or not support the cathedral project.

It is an undeniable fact that the National Chief Imam is an emblem of peace. A man who has lived to portray unity in diversity. A man whose arms are wide opened to accommodate everyone. These were the traits of Prophet Muhammed (S.A.W). Indeed, in his last sermon on Mount Arafat, the Prophet preached on key thematic areas, some of which were on discrimination and peaceful coexistence. The Prophet in this sermon admonished all of us not to discriminate against any human being based on any differences like tribe, race, gender, etc. So, the Imam’s posture and his hospitality are partly in fulfillment of this part of the sermon.

Indeed, the Prophet lived in Yathrib (now Medina) with Christian Jews. In fact, it is narrated in one of the accounts of the first followers of the Prophet that, in one of the battles the Muslims fought with the infidels at the time known as the BATTLE OF THE TRENCH (Khandaq), it was one Persian Christian, Salman Al-Farsi, who suggested to the Prophet for a trench to be dug around main entry points of Yathrib (Medina) to create a blockade from the attack of the infidels from Mecca. Joint to this narration though was that Al-Farsi converted into Islam later. There are a couple of the Prophets engagements with the Christians and Jews during his Prophethood. It is part of Islamic history that the first Hijra (migration) of the first followers of the Prophet in Mecca was to seek asylum in Abyssinia, a Christian nation ruled by Christian Monks.

In Ghana today, we are all aware of how polarized the country has become. We are sharply divided along political, religious and ethnic lines so much so that a brother is ready to spill the blood of another owing to political, religious or even ethnic differences. In the midst of this polarization, Sheikh Uthman Nuhu Sharabutu has maintained his head up and above them. He has demonstrated religious tolerance and has lived it all through. This is commendable because, without peace and unity, there won’t be religion or political party or an ethnic group to exercise your extremism with.

Convincingly, the National Chief Imam is not only an embodiment of the Muslim Ummah but as a father of the Nation to a very large extent. In fact, without prejudice to my Islamic orientation, I will submit that he’s one of the last institutions standing to hold this country together. So, I am against those Muslims who have decided to attack his person and the office for their strict religious orientation. Although I have nothing against them holding those views, I think we need to look far beyond our immediate conveniences.

Owing to this father figure our Chief Imam has carved for himself, his decisions must therefore reflect that of an impartial, unbiased, non-discriminatory father who is ready to listen to all his sons and daughters. The best to do as a father described in the above brackets in times when the stakes are high and opinions are sharply divided is to stay in the middle. A father seen to be taking sides in these times when some of his sons and daughters are against the said decision to build the cathedral is one ready to be tagged as a partial father who is discriminating amongst his children.

It is an open secret that although this GHC 50,000 into a fund which needs about $200m is just a droplet into the ocean, it is symbolic of an endorsement of the building of the cathedral from the high office of the Chief Imam. The opened endorsement thus communicates to those who are opposed to the project that the Chief Imam doesn’t represent them, their opinions and thoughts. He has simply called the bluff our opposition by this singular gesture.

Although the originators of this idea to the National Chief Imam to donate to the cathedral project would have achieved their objective (political or religious), but in the long run, the sharp religious divisions will be accentuated if not worsened. I believe that this could have been done silently if indeed it was purely to support the project and not to achieve a political or religious end. The money isn’t the problem, the person who donated it isn’t too much of a problem to me, but the symbolism and the timing are my problem.

To those religious extremists who are lashing out at the Chief Imam, did you do same when some churches and some Christian leaders equally donated food and cash to the same Imam during fasting and Eid celebrations? I know he’s first and foremost a spiritual embodiment of the Muslim community in Ghana, but the office and the man himself have grown beyond the exclusivity of a spiritual leader.

Since when has Islam desist from recognizing Christianity? Who are the people of the book? Is it not the case that a Muslim is complete when he upholds the Injil (Bible) as one of the revelations of God (Allah)? For once, let’s stop this hypocrisy and extremism.

Finally, to those who seek to profiteer politically, socially, culturally or in any way other than to advance the peace of this country or to further the contours of the Islamic Region or even to elevate the office of the Chief Imam, I leave you with one Hadith which is recognized by most Islamic scholars as an nucleus around which Islam revolves…”Actions are according to intentions, and everyone will get what was intended. Whoever migrates with an intention for Allah and His Messenger, Muhammed (S.A.W), the migration will be for the sake of Allah and His Messenger. And whoever migrates for worldly gain or to marry a woman, then his migration will be for the sake of whatever he migrated for”.

The above is No. 1 out of 40 of Al-Nawawi Hadiths. Allah is the master of Judges and He alone knows the intentions and what rests in the hearts of all living things.