By Audu Abba Kurama with Animu Abubakar in Kano
Nigeria 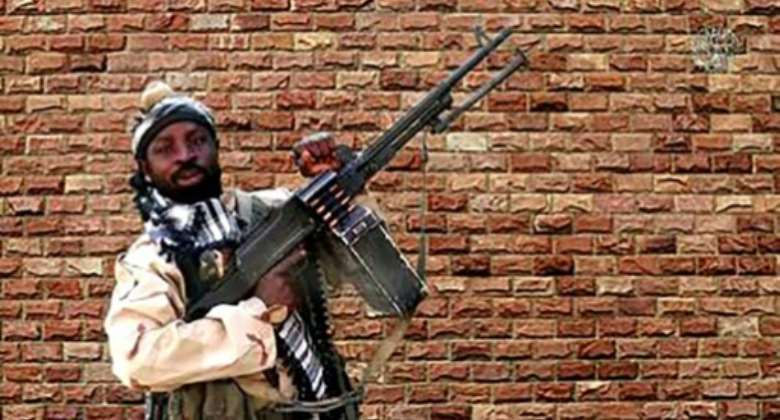 Killed: Boko Haram leader Abubakar Shekau, seen in a video released by his group in January 2018. By Handout (BOKO HARAM/AFP)

Images of bedraggled jihadists and families surrendering to the military have sparked heated debate over the Nigerian army's claims of success in its long war and the future of fighters who lay down their guns.

Scores of Boko Haram members have been shown in army images this month surrendering to soldiers in northeast Borno state, some given hand-written signs to hold asking Nigerians for forgiveness.

Nigeria's army describes these as mass defections -- the success, it says, of an intensified campaign to end a 12-year conflict that has killed around 40,000 people and displaced around two million more.

But analysts and security sources say the surrenders are probably driven more by Boko Haram's recent losses in infighting with rival jihadists from the Islamic State West Africa Province or ISWAP.

ISWAP has emerged as the dominant force since battles between the two factions led to the death of Boko Haram chief Abubakar Shekau in May and a dramatic shift in power.

Angry residents in Borno fear jihadists responsible for years of mayhem will escape punishment or just slip back into war.

Defections are not uncommon in Nigeria. But for the army, battling Boko Haram and ISWAP, the recent surge in surrenders is proof of success.

"We are making headway and we are achieving results, and if we continue, and we should, we will conclude this episode in the northeast," said Chief Army Staff Lt. Gen. Farouk Yahaya said at a recent event.

"Those others in the bush, we call on them to also come and surrender their arms like their colleagues."

Nigeria's military says around 1,000 repentant Boko Haram members and their families have surrendered recently, according to army statements.

Vincent Foucher, a fellow at France's CNRS research institution, said ISWAP control after Shekau's death was the key to new defections, both for civilians forced to live under Boko Haram and for its fighters.

"They have lost power to ISWAP and they feel they cannot maintain their established livelihoods under ISWAP control," he said.

"It is plausible that some senior commanders have surrendered, as they are the ones who stand to lose most under ISWAP."

Nigeria's conflict has ebbed and flowed since it erupted in 2009. But the Boko Haram chief's death in May appears to be a major shift in the conflict.

One security source said the ranks of Boko Haram members who handed themselves in -- conscripted youth and families with no ideological ties or hardline jihadists -- was also a crucial factor.

"I have mixed feelings on the sudden wave of surrenders by Boko Haram fighters," said the security source working in the northeast.

"It will be naive to think Adamu Rugu-Rugu, who was a notorious Boko Haram commander and a ruthless killer, would surrender just like that," the source said referring to one reported defector.

The surrenders are also testing Borno State Governor Babanaga Umara Zulum as anger simmers in the state capital Maiduguri where tens of thousands displaced by violence live in camps. Many residents fear allowing ex-jihadists back.

"We have to choose between an endless war or to cautiously accept the surrendered terrorists which is really painful and difficult for anyone that has lost loved ones," Zulum said in a statement.

Zulum met this week with President Muhammadu Buhari to discuss how to better manage surrenders.

Nigeria has a state-run "Operation Safe Corridor" programme meant to rehabilitate former jihadists as one of the incentives for fighters to leave the war.

Zulum said many who had surrendered recently were those conscripted against their will.

"Unless we want to continue with an endless war, I see no reason why we should reject those who wish to surrender," he told reporters.

But bringing militants back has left many in Maiduguri with bad taste even for those who cautiously welcome the surrenders.

"They will rehabilitate these terrorists, they will give.. a certain amount of cash to restart their lives. We are graduates and what did the government do for us?" said one Maiduguri resident, Guru.

"You cannot kill my father, kill my mother, kill my brother and the government says they will pardon you and you can come and resettle in the town. You cannot rehabilitate a terrorist in just six months."