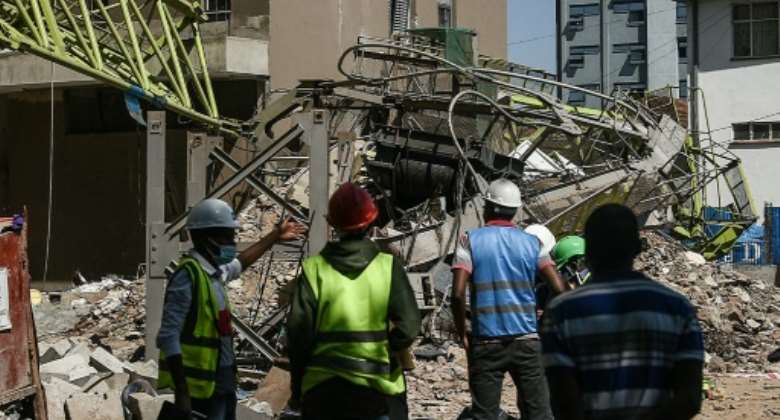 Contractors stand next to the collapsed crane in Kenya's capital Nairobi, on August 26, 2021.. By Simon MAINA (AFP)

Nine people, including two Chinese, were killed and two others injured Thursday after a crane collapsed at a construction site in Kenya's capital Nairobi, police said.

The crane came crashing down while a team of workers was attempting to dismantle it, ZJCC, the Chinese construction company behind the project, said.

The project to build a 14-storey student hostel was being supervised by a Chinese construction firm. By Simon MAINA (AFP)

The cause of the collapse was not immediately clear.

Eyewitnesses said they heard people screaming as the crane slammed into the ground.

"We were having lunch when we heard things falling and thought part of the building was coming down," 27-year-old construction worker Michael Odhiambo told AFP.

"When we got there, we found a crane had snapped and tumbled down," he said, adding that one of the workers managed to escape with his life thanks to a safety harness.

Josephine Matere, a food hawker, described seeing the green crane swing wildly as people desperately clung to it, their colleagues watching in horror.

"They were screaming and watching their colleagues fall," she said, showing a video of the incident.

Fire fighters arrived at the scene nearly two hours after the bodies had been taken to a morgue in a police lorry.

The injured victims were being treated at a nearby hospital, police said.

ZJCC released a statement offering condolences and promising a full probe into the accident.

"We have since sealed off the site and are collaborating with the Kenya Police Service and the Directorate of Occupational Safety & Health Services (DOSHS) in conducting further investigations into the incident in accordance with laws and regulations governing construction sites in Kenya."

The incident happened opposite the headquarters of the defence ministry, with military police now guarding the site.

Shoddy construction and flouted regulations have led to many such deadly accidents in Nairobi.

The East African nation is undergoing a construction boom, but corruption has allowed contractors to cut corners or bypass regulations.

At least three people died in December 2019 when a residential building collapsed in Nairobi.

That incident came three months after seven children died and scores were injured when their school was flattened in an accident blamed on third-rate construction.

In April 2016, 49 people were killed when a six-floor apartment building crumbled in the northeast of the capital after days of heavy rain caused floods and landslides.

The building, constructed two years earlier, had been scheduled to be demolished after being declared structurally unsound.