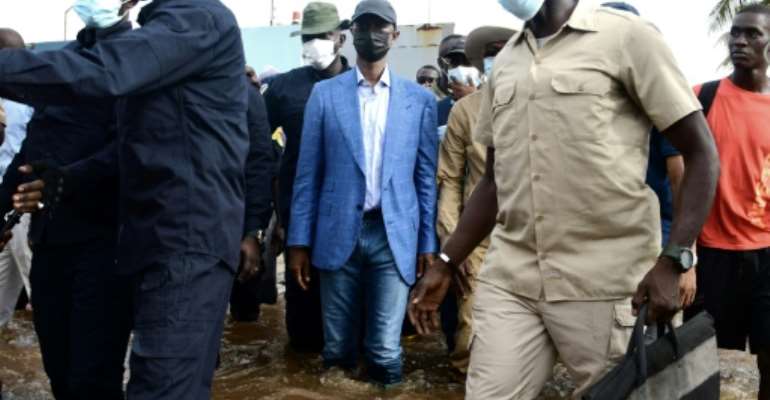 Senegal's Interior Minister Antoine Felix Abdoulaye Diome is up to his knees in water, in a suburb of the West African country's capital, surveying flood damage.

He's inspecting a home in the eastern Keur Massar district: The first floor and courtyard have been submerged in brown water for three days.

Dragonflies hover over the swampy courtyard, which a lone pump is struggling to drain. Inside, furniture has been raised off the ground.

The owner of the home, who declined to be named, is scathing.

"They are incapable," he tells AFP, gesturing towards the minister and his entourage.

Anger has been growing over the increasingly routine flooding in Dakar.

Diome and other officials were booed as they toured Keur Massar, and protesters elsewhere in Dakar blocked a highway.

Comprising about 3.7 million people, the city regularly floods during the July-October rainy reason. But the problem is getting worse. This year, heavy flooding struck after only two days of rain.

The floods have also come after repeated government promises to solve the problem.

Moise David Ndour, another Keur Massar resident, is also fed up. "Nothing has been done," he says. "Some people have even moved away because of this".

Many are expecting worse flooding to come as the rains continue.

According to experts interviewed by AFP, whole districts are built on flood plains, and on soft soils close to the water table. Planning is haphazard and local authorities appear to exert little control.

Senegalese President Macky Sall launched a 10-year plan to combat flooding when he came to power in 2012, with a budget the equivalent of about 1.14 billion euros ($1.4 billion).

Dakar regularly floods during the July-October rainy reason, but the problem is getting worse. By SEYLLOU (AFP)

Water pumps and culverts have been installed in some areas of Dakar, successfully warding off flooding. However, other districts of the rapidly expanding city have been left untouched.

About a quarter of Senegal's population of 16 million people live in the seaside city, where there is fierce pressure to build because of housing shortages.

The government has sought to relieve inundated areas without tackling the reasons underlying regular flooding, according to Senegalese geologist Pape Goumbo Lo.

"The construction of housing must take into account the nature of the soil," he said, adding that there is a need for more studies of the land and the water table.

Free-for-all construction has also exacerbated flooding even as downpours have become less frequent.

"This is a very worrying paradox," says Cheikh Gueye, a geographer and researcher at the Dakar-based NGO Enda Tiers-Monde.

"Less and less rain is causing more and more damage," he adds.

Horses to the rescue

The government has sought to relieve inundated areas without tackling the reasons underlying regular flooding, experts say. By SEYLLOU (AFP/File)

In Mbao, another Dakar suburb, it hasn't rained in three days, but the main road is still flooded with stagnant water.

Motorbikes, scooters and public transportation vehicles can no longer use it.

Ibrahim Cisse, a local with water lapping round his ankles, says "we have no choice but to get wet or use the horse-drawn carriages to cross the street".

In front of him, about a dozen people are perched on a horse-cart, which are common in Senegal but are mostly used to transport goods.

"There is a lot of damage, the shopkeepers can't open," says another local, who declines to be named. "We have to get past this".

But Cheikh Gueye, the geographer, is pessimistic.

"We build in flood zones: Every day new neighbourhoods are created, and the same mistakes are made".