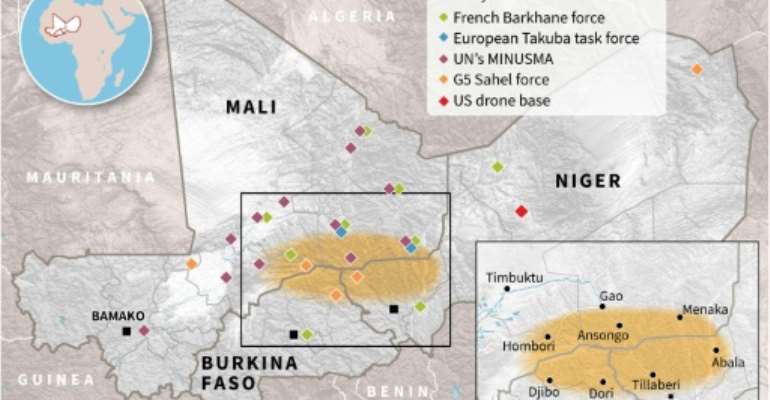 The "three-border" region in the Sahel. By Maryam EL HAMOUCHI (AFP)

Chad on Saturday said it will recall 600 troops, half its contingent, from the multinational G5 Sahel force in the troubled three-borders region of Mali, Niger and Burkina Faso, where an upsurge in jihadist violence has cost thousands of lives.

"This is a strategic redeployment to better adapt to the organisation of the terrorists," spokesman Abderaman Koulamallah told AFP.

Chad's 1,200-strong contingent was deployed there to fight the jihadists, part of a force to which all five of the Sahel region countries -- which also includes Mauritania -- have contributed since 2017.

"That still leaves around 600 soldiers on the ground," said Koulamallah. He said the redeployment had been planned for some time and in cooperation with the G5.

"Regarding the situation on the ground, we need a mobile force, hence the withdrawal of some of our forces with heavy weapons," he said.

The three-borders region along with central Mali, are the areas hardest hit by the jihadists, who have killed thousands of people, soldiers and civilians.

The latest jihadist attack, against a village in Niger's part of the border region, claimed at least 10 lives on Saturday.

France, also heavily involved in the Sahel, recently announced it was cutting its military presence in the region from around 5,000 to between 2,500 and 3,000 troops.

Paris had long been calling for a greater Chadian contribution before their soldiers arrived in February.

The French Ministry of Defence confirmed that the decision "was taken in full consultation" with both the G5 and the Sahel coalition, including France.

"It is a question of having a force that is lighter, more reactive and easier to support, while retaining the means of combat best suited to the enemy," he said.

A Malian source at the Ministry of Defence, speaking on condition of anonymity, said that Chad had told Mali of "this readjustment" and that the process of withdrawing the soldiers was "well coordinated".

Complicating the situation in the three-borders region is the intercommunal violence there, with several rival armed groups active.

The jihadist groups operating there include a number aligned with Al-Qaeda or with Islamic State in the Greater Sahara (ISGS).

They play on the local community tensions to recruit fighters to their forces as well as offering protection in return for payment.

Chad has its own problem with jihadist violence in the Lake Chad region that borders Niger, Nigeria and Cameroon.

At the beginning of the month, jihadist fighters in the region killed at least 26 Chadian soldiers, wounding another 14, eight seriously, in an attack attributed to the Boko Haram group.

Jihadists from Boko Haram and a rival splinter group, the Islamic State West Africa Province (ISWAP), have been using the region for years as a base from which to attack troops and civilians in all four countries.

And as well as the jihadist insurgency, Chad's military rulers face a challenge from armed opposition groups.

Chad's junta is led by the son of president Idriss Deby Itno, who died in April fighting rebels in the north. The 37-year-old Mahamat Idriss Deby has consolidated nearly all powers around himself and 14 generals who were close to his father.